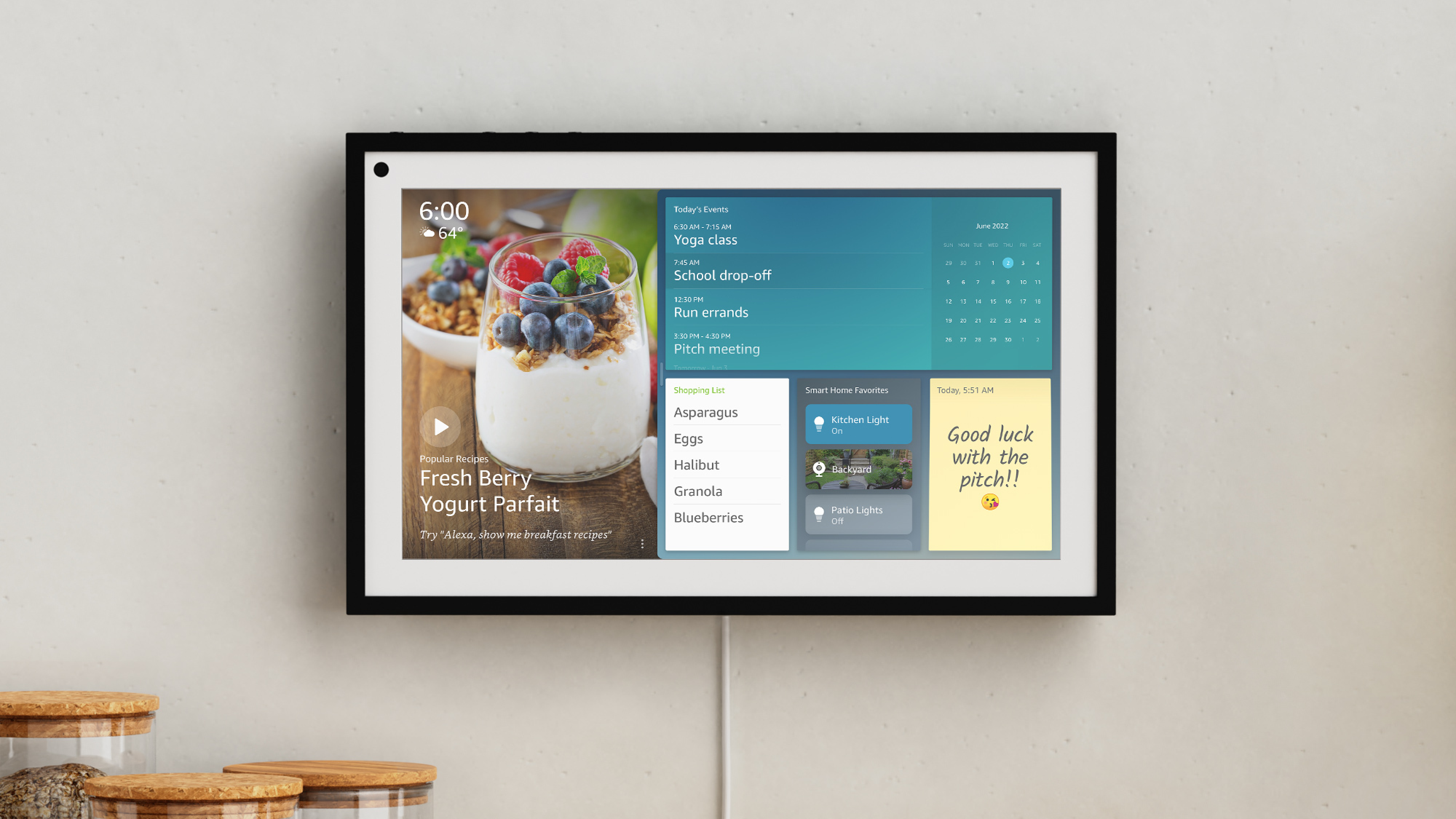 The holiday shopping season looms and Amazon is getting ready by unleashing a cadre of new products across its various hardware lines. Just last week, the company tossed out its new Kindle model, but the retail behemoth has a lot more in store for the end of this year.

Amazon’s overarching theme for these announcements boils down to its “ambient intelligence” concept. Amazon sees AI as an all-encompassing entity that lives in your devices and integrates itself into your life without requiring that you actually think about them. The premise extends from its basic smart home gear, all the way up to its new robot. Yes, there’s an Amazon robot.

Users with an Echo Show 10 or current gen Echos will be able to bring all of their voice commands onto the device. The data never gets sent to the cloud. It’s dependent upon Amazon’s most recent processor, but the company plans to expand it throughout the Alexa line. This is part of the company’s security initiative as it hopes to build trust in Alexa users. It also likely saves Amazon quite a bit of cost when it comes to cutting down on bandwidth.

As part of its environmental initiative, Amazon has developed its own smart thermostat in a partnership with Honeywell home. It’s a sparse-looking device and it will only cost $59, which is a serious shot at Google’s Nest thermostats, which start at nearly twice that cost.

This is a no-brainer of a product for Amazon if it’s really committed to this ambient technology concept. I might have suspected the company would try to rope its thermostat in with the Ring products the way Google did with Nest, but this is clearly its own thing. Also, this very clearly seems like a starter product in the space for Amazon and I wouldn’t be surprised to see the line expand down the road.

The new Echo Show 15 is a bigger mountable smart home hub that emulates a painting on the wall, rather than a picture frame on your desk. It has a 15.6-inch screen which is like putting a laptop display on your wall. It doubles as a TV, but also sports a new Alexa-based interface that focuses on widgets.  Any family member can add events to the built-in calendar or add sticky notes. There’s a smart home widget that shows you footage from Ring cameras or allows you to see the status of your smart home devices. So, if a light is on upstairs, you’ll see it from the screen.

It supports 1080p video streaming, so you can use it like a kitchen TV. The size seems like a big advantage over typical Echo Show devices. When it’s not showing widgets, it can show family photos or pre-loaded art. It’s the first device with the AZ2 Neural Engine chip, which processes computer vision workloads in parallel on-device. Alexa can recognize you when you enter the camera’s field of view. So, it can show you information specific to you. Amazon says all of that recognition stuff happens on the device rather than sending info to the cloud.

You can also now teach Alexa more things. You can teach it that you’re a vegetarian, so if you ask it for recipes, it will know not to serve you up a bunch of meat. The Echo Show 15 will cost $249 when it launches later this year.

You can now teach Alexa to recognize specific sounds around your home. This builds on the assistant’s ability to recognize sounds like glass breaking. Amazon says it will be useful for recognizing sounds like the door-open alarm on your fridge.

Amazon is teaming up with Disney to allow users to communicate with digital versions of Disney characters through the Alexa platform. The Disney Magical Companion is a new persona that “works alongside” Alexa. The companies plan to put special Echo devices around Disney properties to handle park-specific requests.

You’ll be able to purchase access to “Hey Disney!” and buy a Mickey-inspired stand for your Echo Show 5. It will be interesting to see if this kind of thing trickles down to other companies.

Amazon has combined video calling with digital activities in the Amazon Glow, a truly interesting remote play experience for kids. The device looks like a tablet in a stand with a camera at the top and an 8-inch screen on the front for video calls. A top-mounted projector creates a 19-inch touch-sensitive area on the surface below. It allows kids to do activities with people on the other end of the call.

The video calling tech seems pretty standard, but the projector makes it fertile for content partnerships. Amazon already has several big-name content partners onboard to make things like games and interactive story books. This space clearly still has some room to grow. Facebook just recently announced updated versions of its Portal video calling devices, but they don’t have the interactive projection tech that Amazon is offering. Amazon really seems to be catering to older people and kids with many of these new products and services.

Initially, the Glow through an invite-only “early access” program and will cost $249. The price will rise to $299 when the product becomes widely available. Amazon will accept requests for invites starting today, and plans to ship the first wave of Glows “in the coming weeks.”

Remember Amazon’s subscription-augmented fitness device, the Amazon Halo? The company announced plans greatly expand the Halo subscription, and pair it with a new fitness tracker, the Halo View. The Fitbit-like device costs just $79, and comes with a full year of Halo membership. The Halo View will launch before the end of the year so people can dive hard into the Halo Fitness platform along with their New Year’s resolutions.

Amazon is also ready to unleash its Halo Nutrition platform. It has 500 recipes from partners including Whole Foods (go figure!) and makes it simple to shop for the groceries you need. Amazon will know when you’re not eating your veggies and then it will sell you some veggies.

Amazon is offering users a chance to sign up and buy the first Always Home Cam. The drone that flies around your home will actually start making its way into customer homes soon.

Ring has also teamed up with router manufacturer Eero to create the Ring Alarm Pro, a combination security system and mesh network. The devices now help cover your house with surveillance as well as wifi coverage. It allows users to insert microSD cards into the camera to store them locally. The Ring Alarm Pro is available for pre-order today for $249.

Lastly, Ring announced a second partnership with Home Depot to create a portable version of its security system specifically for construction sites. It can work off of a cellular network since there won’t necessarily be a wifi connection available on the site.

If you want to really max out the security settings on Ring, you can pay an extra subscription fee to monitor the footage from your cameras. Security professionals can observe and even interact with people via the Ring devices when you’re not home. Amazon is partnering with Rapid Response at first and expand to other third party companies. It won’t be cheap. Service will start at $99 per month.

In addition to the typical Ring doorbells, there’s now a $49 Blink version that runs off of both wired power or battery. The Blink Floodlight Camera costs just $139, too, which is almost $100 cheaper than the pricier Ring versions.

The Amazon robot is finally here. Astro is like a rolling Echo Show with a simulated face on its screen. It’s literally a rolling robot that can drive around a home.

Astro moves autonomously through your house using computer vision. Amazon says you can define out of bounds zones for the robot and enable do-not-disturb modes to protect security.

At a glance, Astro’s primary use seems to be remote communication and surveillance. You can use it for remote care by getting a live feed from its cameras. It has a periscope camera that pops out of its head to let you see things higher up. This ties tightly into the new Alexa Together platform, which is specifically designed to let people monitor aging parents for which they care.

Astro will cost $999. You can sign up today for the invite-only purchasing program. It will start shipping later this year.

All the new Amazon stuff

While Astro was certainly an unexpected development, these products make sense for Amazon going into the holidays. This was a more forward-looking event than I’m used to for this time of year. Many of the devices are part of early access programs during which people need to sign up and get invited to make a purchase. The Echo Show 15 will make its way to the market before the holidays, as well the new Halo band, but the home drone camera and the Astro bot won’t be public for a while. The new Blink video doorbell will likely sell lots of units for just $50, which could draw even more people into the Ring platform and the larger Amazon smart home umbrella. After all, that’s largely the point for Amazon hardware in the first place.

7 New Gadgets to Keep on Your Radar

7 New Gadgets You Should Have on Your Radar This Week