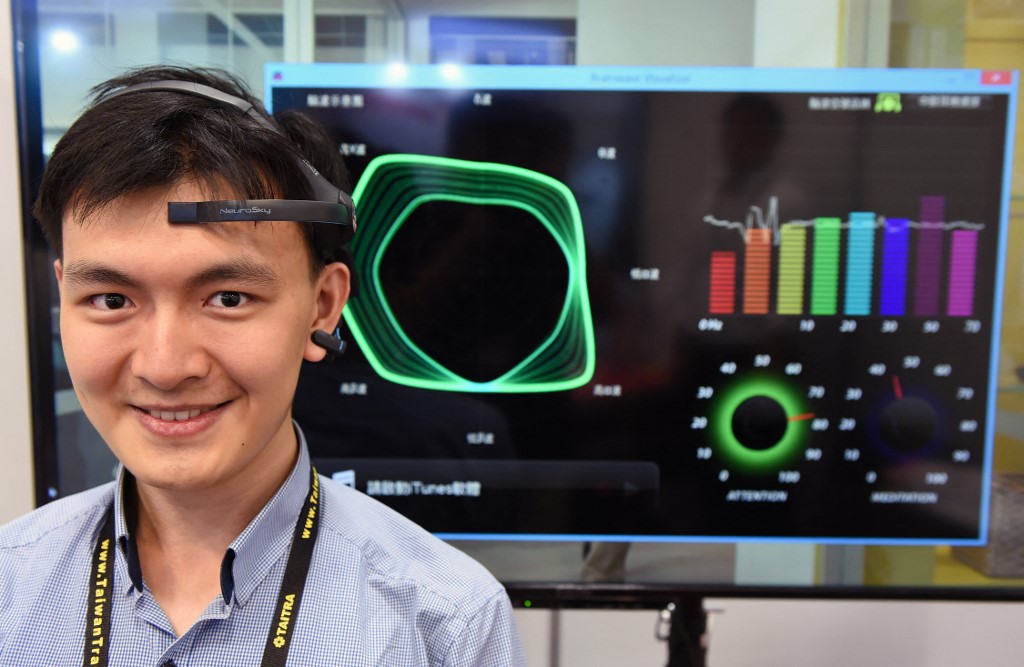 Chinese researchers have had to be innovative to develop working BCI applications, despite tech supply chain limitations in recent years. (Photo by SAM YEH / AFP)

Neuralink, a US-based technology firm founded by serial entrepreneur Elon Musk, might have the edge in developing brain-computer interface (or BCI) technology, but Chinese research teams have been catching up in their development of this crucial biosciences space that could have far-ranging applications, including in medicine and aerospace.

Brain-computer interface technology has come a long way from seeming like science fiction, and while Musk’s Neuralink has gone so far as to implant a microchip in a monkey’s skull and enable it to control video games with just its mind, China’s researchers have seen some success with wearable headgear wired with a chip and sensing electrodes. This allows for a non-invasive alternative to allow brain signals to be interpreted and transmitted onscreen.

Non-invasive wearables with a brain-computer interface are slowly catching on, with development at a somewhat advanced level due to sizable military funding in the initial stages. Companies like Kernel, Qneuro, NeuroSky and EMOTIV are rapidly moving toward widely-available devices and less-invasive BCI methods, with neuroheadsets becoming a more common commercial option. Even Facebook has been developing a BCI implant that reads brain activity, and is able to decipher a basic set of words.

The Tianjin Brain Science Center neuro-engineering team at Tianjin University has been developing an updated version of its Braintalker chip that utilizes less power and has a higher system-on-chip integration. When inserted into a wearable head cap, the wearer is able to type commands using just the mind. The team says although there is some way to go before the technology can be commercialized, it is already able to capture “good-quality” brain intentions from electroencephalogram signals that could meet the demands for commercial applications.

The same research team had last year created a high-speed BCI system with the world’s largest command set, using an innovative mixed coding approach that enables the system to process up to 108 computer commands. Such a function is about three to four times that of current competitive brain-computer interface systems.

The Tianjin research is one of several BCI research advances being made in the world’s second-largest economy. But brain-computer interface tech is one of 14 emerging technologies on the US Industry and Security Bureau’s export control list, and a global chip shortage is making it likely that sharing technology with the US and other nations would be limited, and perhaps impossible, for some time.

The technology blockade has forced Chinese researchers to be innovative to overcome the lack of imported chips and materials available in the mainland. And while the gap in invasive BCI implants is still behind other markets, the Chinese teams insist their non-invasive applications are world-class and have been successfully tested in healthcare, where the Zhejiang University School of Medicine’s closed-loop neurostimulator delivered a therapeutic electrical stimulus to effectively control epilepsy in clinical applications.

And the Tianjin University is also working with China’s astronaut training center to jointly explore BCI technology and intelligent robots for aerospace applications, where the Braintalker chip is capable of reducing the loads of astronauts, making it easier for them to move around in outer space.

Joe’s interest in tech began when, as a child, he first saw footage of the Apollo space missions. He still holds out hope to either see the first man on Mars, or Jetson’s-style flying cars in his lifetime.