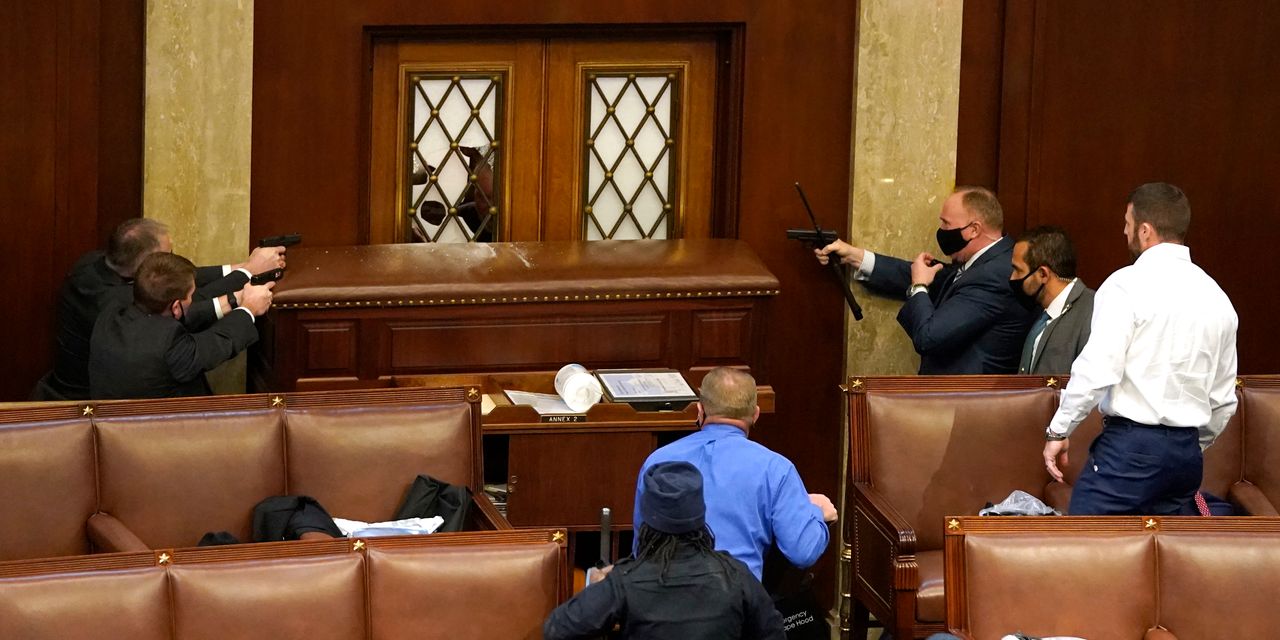 
Markets ended mixed following news that Trump supporters stormed the Capitol, causing chaos on the day lawmakers met to certify the Electoral College votes for the presidency, and as the results of the Georgia Senate runoff gave Democrats control of both chambers of Congress. That didn’t stop the Dow Jones Industrial Average from notching another fresh high, its first of 2021.

The Capitol building was placed on lockdown after it was breached by a mob midafternoon. Following the news, stocks lost some of the gains seen earlier in response to expectations that a Blue Wave will lead to greater fiscal stimulus—a boon for the economy. At the close, the

Tech stocks, which had recovered from earlier declines, fell again, with the

0.6%. Big names largely deepened their losses as the afternoon wore on:

Other asset classes were reacting as well. The U.S. Dollar Index has climbed 0.1%, while the 10-year Treasury yield has jumped 0.086 percentage point to 1.041%, the biggest one-day yield gain since December 1.

The Sevens Report’s Tom Essaye wrote early in the day that if Ossoff succeeded, investors should “expect a continuation of this morning’s price action with a rotation out of tech and into cyclical and value stocks as well as a further decline in the dollar and rise in yields.”

European stocks rose, with the Stoxx 600 moving 1.4% higher and the German

continued its strong start to the year, climbing 3.5%, led by banks and oil giants

IG market analyst Joshua Mahony said investors were now considering a “much more disruptive and transformative” four years under Joe Biden than previously expected, if the Democrats end up controlling both sides of Congress. “With traders weighing up the benefits of greater fiscal expansion against more restrictive policies towards tech and the oil-and-gas sector, it comes as no surprise to see somewhat varied responses throughout markets,” he said.

Almost overshadowed by the political news was President Donald Trump signing an executive order banning transactions with eight Chinese apps, including Alipay and

pay. The move put Asian markets under pressure overnight. However, the order won’t take effect for 45 days, when Joe Biden will be president.

(MA) shares gained 0.6% after Bank of America upgraded the stock to buy from neutral.

Bank stocks popped as interest rates did the same.

(PEP) fell 1.2% after being downgraded to In-line from Outperform at Evercore.

(KO) fell 3.4% after being downgraded to Hold from Buy at Deutsche Bank, which also reduced its price target to $55 from $57. It was the third cut for Coca-Cola in three days this week.

(BYND) dropped 5.5% after getting cut to Neutral from Overweight at Piper Sandler.

(UNH) has is up 3.5% after its Optum unit agreed to acquire

(Callum Keown contributed to this article.)