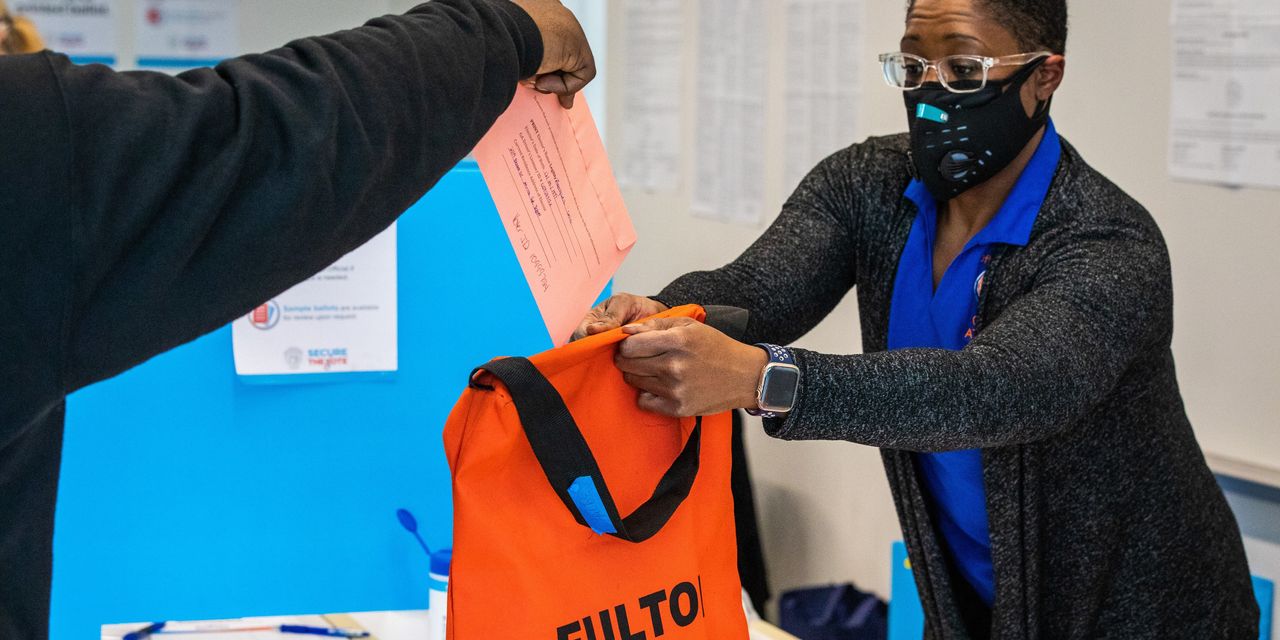 The Dow Jones Industrial Average surged Wednesday as investors piled into shares of economically sensitive companies on bets that the Democrats were poised to take control of the Senate following early results from Georgia’s runoff elections.

Meanwhile, the tech-heavy Nasdaq Composite turned positive, adding 0.2% after tumbling when markets opened as investors worried that a Democrat-controlled Congress would lead to higher taxes and tighter regulations on tech giants.

Those concerns seemed to fade, however, as the day progressed, with some investors and analysts saying that they don’t expect policy changes to be imminent. Plus, some said, even if Democrats take control of both Senate seats in Georgia, moderate-leaning Democrats may act as a check on a more progressive agenda.

Control of the Senate will be decided based on the two runoff elections in Georgia. The Democrats flipped one Republican seat and maintained a narrow lead in the second race, which was too close to call. If both Democratic candidates win, they will have the majority in a 50-50 Senate as Vice President-elect

will break any ties.

A change of control in the Senate is seen by some as a catalyst that could shift the types of stocks favored by investors away from names that dominated last year’s rally. Big tech companies were getting hit hardest as trading kicked off.

Meanwhile, stocks hit hard by the pandemic such as banks, industrials and small companies jumped.

all surged more than 6%.

Meanwhile, in bond markets, the yield on the benchmark 10-year U.S. Treasury rose above 1% for the first time since March. The yield, which rises as the price falls, was recently trading at 1.049%, from 0.955% on Tuesday.

A Democratic-controlled Washington would also boost the possibility of more fiscal stimulus, said

chief strategist at Principal Global Investors. That will help lift government-bond yields, which track expectations for growth and inflation. More government spending supports stocks hit hardest by the pandemic, such as airlines and car companies.

But with Democratic control of the Senate likely to be razor thin, the legislative agenda would be tempered, she said.

“Once the clouds have cleared, the market will realize that, yes, this is a blue sweep but it is a very, very marginal one,” she said. “It is certainly not the status quo we have been used to, but I also wouldn’t expect that much of a change.”

rose 7.6% after the pharmaceutical wholesaler said it would buy most of

Alliance Healthcare businesses for around $6.5 billion.

In overseas markets, European stocks rose, with the Stoxx Europe 600 up 1.4%.

The Federal Reserve will release minutes of its December policy meeting at 2 p.m. ET. The central bank used the meeting to say purchases of government debt and mortgage securities would continue until substantial progress toward broader employment and inflation targets had been met.