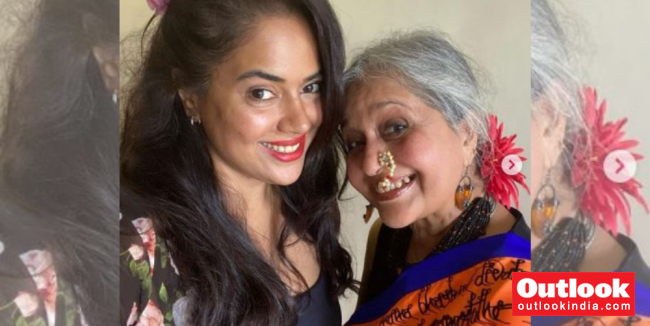 For Bollywood actor-turned-influencer Sameera Reddy, social media has helped her connect with people and create an online community. Being an influencer has endowed Sameera with a great opportunity to indulge in meaningful dialogue with her followers. Sameera says, “I have discovered my love for creating content that brings a smile, heals the soul and most importantly encourages healthy conversations that I felt was lacking on social media platforms. There was also a need to make my account more real and create a space where I can reach out to others, make a difference and contribute to the society.”

Sameera started out by sharing snippets of her life on social media during the coronavirus-induced lockdown and very soon she started gaining scores of followers. Also, the fact that there were not many celebrities back then, who focussed on children’s issues made Sameera an instant hit with her followers.

Sameera is now a stay-at-home mother. Her videos focus on issues such as body positivity, health and family. “After the coronavirus pandemic broke out, I felt there’s a very strong need to address these issues and working as a content creator also helped me stay sane. I don’t work on creating content every day. My content consists of candid moments that are generated effortlessly and get woven into a story that my followers can connect with and feel inspired,” says Sameera.

When asked if she has a team that manages her social media accounts, Sameera says she does it all by herself. “I am quite possessive of my voice and don’t let anyone manage my accounts which is why I feel the content on my page is original. I have my quirky sense of humour, a side of me I couldn’t share publicly being an actor earlier,” she says.

The actor-turned-influencer has also managed to convince her mother-in-law Manjiri Varde to take up video-making. Manjiri has been uploading cooking tutorials that focus on whipping up tasty dishes using limited ingredients. The ‘Messy Mama and Sassy Saasu’ videos have also become a huge hit. “I do believe that as an artist, one’s aesthetics and thought processes are slightly unique and creative. And so, even at the lovely age of 65, when my daughter-in-law suggested that we can do a short video, called ‘Flip the Switch’ made popular by JLo, I simply agreed,” says Manjiri.

Manjiri took to cooking when she was 15-yeard-old and it has given her immense joy to share her passion with her followers on social media. “I am always very pleasantly surprised by the positive comments and outpouring of love I receive daily,” she says adding that social media has helped her transform from a quiet person into a camera-friendly influencer.

Interestingly, the pandemic has enabled social media influencers to discover their unique niches and come up with innovative ways to transform their homes into exotic destinations.

Narrating how ‘Messy Mama and Sassy Saasu’ came about, Manjiri says, “During the lockdown Sameera and I were cooking one or two meals daily. She discovered amazingly simple dishes and I got to taste some super exotic ones. She suggested we cook on camera. I was game as my dishes were simple. She wanted a name for me. She was already known as the Messy Mama influencer. I suggested Sassy since I was her Saasu.”

It’s been a super fun journey of eight months now for Sameera and Varde. “We cook, we eat, we laugh, we banter, we make mistakes and yet it’s a beautiful camaraderie that we share,” adds Varde. As for Sameera, it gives her insight into relevant topics and helps her to move towards a more mindful happy space. Isn’t that what an influencer should be focused on? Content creation needs to be fun and inspiring not stressful. “Till the time it is fun, I will continue on this exciting new path of social-media discovery,’ says Sameera.

Meanwhile, it hasn’t been a cakewalk for fashion influencer, Sejal Kumar. The first couple of months during the coronavirus-induced lockdown were a little tricky for her as she was trying to figure out how to shoot and create content all by herself, but once she got used to the routine, there was no stopping her.

But how profitable has the pandemic period been for the influencers?

The pandemic truly pushed some of the social media influencers to evolve and grow like never before. Sejal says, “The audience has definitely been very responsive in this period and I have gained many new followers as well.”

Sejal started out as an influencer while she was in college. It was a slow start, but her dreams kept her going. She loves working with brands that have a fun and peppy vibe as that matches with the nature of her content. She also enjoys working on campaigns that aim to bring about social change.

“I uploaded my first video 5 years ago while I was in Turkey for an internship. It was on ‘Summer Style’ and I gained 22 subscribers after I posted that video and I was pretty happy. Five years later, I have to say, I have the best job in the world,” Sejal says.

While the lockdown ushered in a fair share of problems for most, being confined to our homes with our gadgets also gave us an opportunity to discover new influencers.

Since content is considered king, social media influencer needs to know their target audience. Influencers are finding ways to re-invent their content and the way users interact with influencers has also changed.

Health enthusiast from Mumbai, Ragini Sen who spends most of her time scrolling through social media says, “I only follow health influencers who share good content and who talk sense. Those who talk about quinoa, rolled oats and berries are just aimlessly promoting certain brands for their own personal monetary benefits. I follow people who promote local produce.”

The pandemic has also drastically changed the manner in which social influencers Sudipta De and Snigdha Bhowmick go about their work. The duo explores luxuru travel, food and beverages on their social media space ‘Salt &Sandals’. As one of their major verticals and source of income, “travel” has been put on hold, it has allowed them to experiment and find out newer sources of income in the food and beverage sectors.

Snigdha Bhowmick says, “Due to brands suffering massive losses because of cancellations, most of our projects involving travel were cancelled including a trip we had planned to Eastern Europe in early April. Since then, brands are slowly but steadily starting to launch projects that offer decreased payments as travel restrictions have been lifted over the last few weeks and money is slowly starting to trickle in. There has been a tremendous decrease in affiliate marketing from travel-related posts, for which the traffic nosedived during the initial days of the pandemic and still remains just a fraction of what it was during the pre-Covid era.”

Influencers are also adjusting to the new changes in the digital marketing industry. In the food sector, there has been a drastic shift as people switched to take-home deliveries. Even luxury food and hospitality brands have jumped on the bandwagon looking to make hay when the sun shines. The beverage sector has also followed a similar trend and as the festive season draws near, they have been ramping up their operations to promote their products.

Snigdha says, “The previous loss of travel-based affiliate income has been well compensated by affiliate earnings in the other two sectors, especially shopping for luxury products.”

Like most industries, the marketing industry has seen a considerable number of brands postponing their events with a lot of paid promotions getting cancelled. There has been a major decline in business due to the Covid-19 outbreak for many influencers. So, many of them had to rethink their posts and come up with innovative ways to share content.

Sharmishtha Chowdhury, a fashion and lifestyle content creator says, “I have tried switching from shooting aesthetic images of sponsored content to adopting a more personal style. I almost did a cooking marathon during the initial days of the lockdown so I shared a lot of recipes on my posts and stories. I have always tried to engage with my followers via collaborating with other brands for LIVE sessions.”

Sharmishtha feels that the pandemic has given influencers a lot of time to explore their hidden talents, adding that she has really enjoyed picking up her paint brushes while simultaneously nurturing an interest in gardening.

And even though the pandemic has had a massive impact on the country’s economy, the social media-influencer industry on the contrary has performed well.

With most people inevitably spending more time in front of their screens, brands started paying more attention to influencers.

While, initially the number of commercials we received decreased, the situation has stabilised now, with numerous small brands and sellers also preferring to advertise their products online, resulting in more opportunities for social media influencers, says fashion influencer Shiwangi Peswani.

“I live in Agra, a tier-two city and the businesses here were never really interested in internet marketing but Covid-19 has changed the marketing landscape completely and now even every small business owner wants to sell his/her products online through Instagram and Facebook. And since the influencers can help them reach the target audience, it’s been a win-win situation.

Shiwangi also notes that the pandemic has also witnessed a massive increase in the number of posts influencers share.

“I have started sharing a new video or a post daily or sometimes twice. Earlier, I used to go out for photoshoots and promotional events but now everything is done from home and this has given me a chance to create content from the comfort of my home and I am loving it,” Shiwangi says.

The pandemic has also turned out to be a “blessing in disguise” for 21-year-old Saloni Gaur popularly known as Nazma Appi. Saloni who shot to fame due to her quirky takes on contemporary issues says that pandemic enabled her to reach out to her audience like never before. “I started getting a lot of engagement on my posts as people were watching online content more than ever before,” Saloni says.