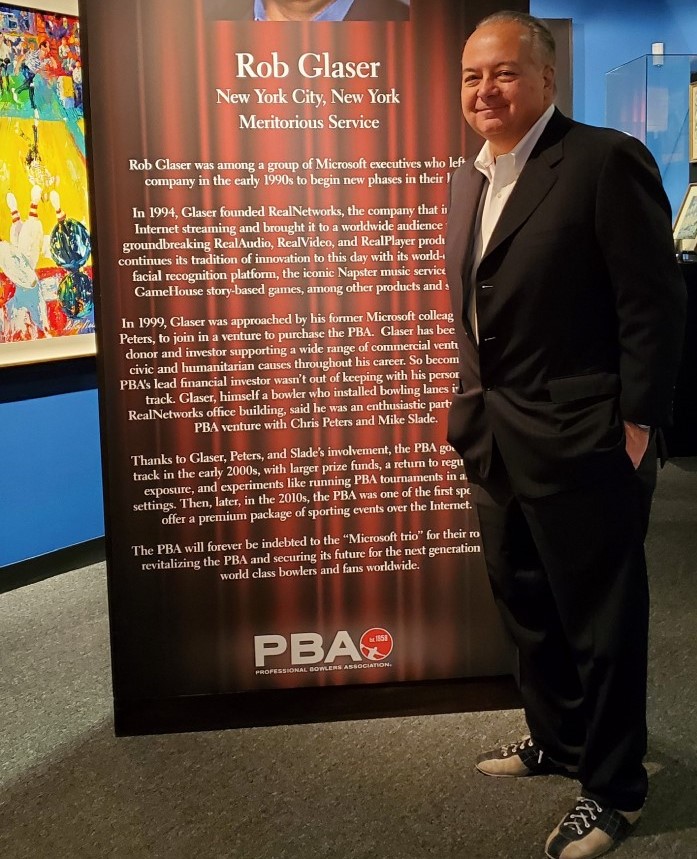 Rob Glaser is best known as the founder and CEO of RealNetworks, the Seattle-based company that specializes in digital media, games and computer vision technology. But for about two decades, he was also part of the ownership group for the Professional Bowlers Association, along with his former Microsoft colleagues Chris Peters and Mike Slade.

That’s how Glaser landed in the PBA Hall of Fame earlier this year, despite never having been a pro bowler.

It also makes Glaser the answer to what turned out to be a tough trivia question on the latest episode of the GeekWire Podcast. As part of our regular tech trivia contest for listeners, we asked, “Which current CEO of a Seattle tech company has been inducted into the hall of fame of a professional sport?” We received lots of guesses, but only one right answer.

So we decided to get the backstory from Glaser for this bonus episode. We also talked about RealNetworks’ new MaskCheck app, which uses computer vision to detect whether people are wearing masks properly in compliance with public health guidelines.

Listen below, or subscribe to GeekWire in any podcast app, and continue reading for more details.

Glaser has bowled since he was a kid growing up in Yonkers, N.Y. Further proving his devotion to the sport, one of the quirks of the former RealNetworks headquarters on Seattle’s Elliott Avenue was the two-lane bowling alley in the basement.

After leaving Microsoft, Glaser joined with Peters and Slade to purchase and the PBA, which was in need of a turnaround after losing its TV contract, among other challenges.

He says he loves bowling because it’s something almost anyone can do, as opposed to sports such as football, baseball or track that rely on size and speed. In addition, he said, bowling rewards qualities that he values, including consistency and adaptability.

He added, “I also like the fact that it’s a team sport, and an individual sport, so you can play it either way.”

Not coincidentally, in each of those areas, there are parallels to business and tech.

Glaser was part of the PBA ownership group until it was purchased last year by Bowlero Group, previously known as Bowlmor AMF. Glaser and Slade were inducted into the PBA Hall of Fame in January, joining Peters, who was inducted previously. Glaser joked that he would be “almost certainly the worst bowler in the PBA Hall of Fame, if it weren’t for Mike Slade.”

Read more of the background in Glaser’s acceptance speech at the Hall of Fame ceremony in January.

Congrats to our contest winner Isaac Alexander, who will receive a GeekWire mask and mug as his prize. We’ll be back this weekend, with a special year-in-review episode with guest commentator Ed Lazowska, University of Washington computer science professor.