Internet detectives are identifying scores of pro-Trump rioters at the Capitol. Some have already been fired. 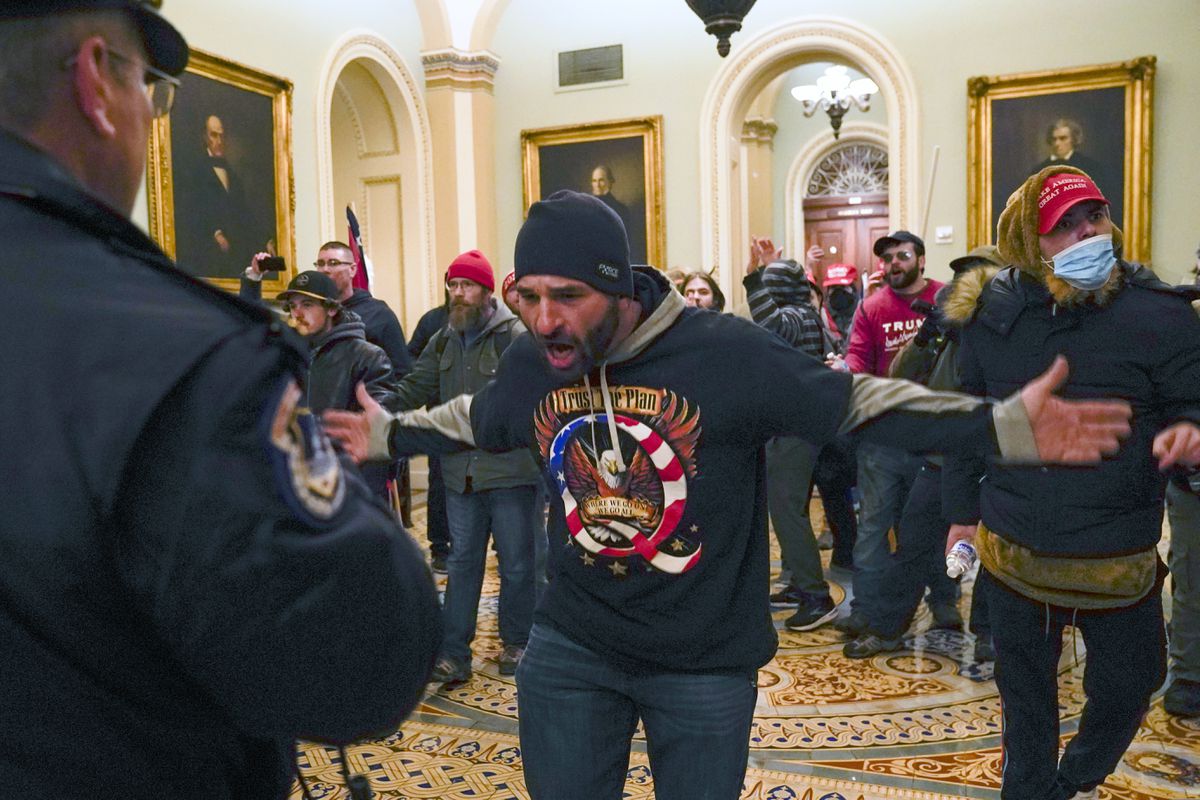 WASHINGTON – As he strolled past gold-framed portraits of past congressional leaders, one rioter who stormed the Capitol in a pro-Trump mob on Wednesday wore a red Trump hat, a commemorative sweatshirt from the president’s inauguration and a lanyard around his neck.

When a photo of him went viral, it didn’t take Internet sleuths long to realize that the lanyard held his work badge- clearly identifying him as an employee of Navistar Direct Marketing, a printing company in Frederick, Md.

He’s not alone among the rioters who wreaked havoc in Congress. While police and the FBI work to identify and arrest members of the mob, online detectives are also crowdsourcing information and doxing them – exposing the rioters to criminal prosecution, but also more immediate action from their bosses.

Since most of the rioters stormed the Capitol maskless, online detectives had a unique opportunity to easily identify them. And many made it even easier – they live-streamed their participation and later bragged about their escapades.

Using journalists’ photos and videos, as well as live-streamed videos from rioters, untold Twitter users and Instagram accounts have been feverishly working since Wednesday to ID and name the participants who stormed down the halls of the Capitol, ransacking lawmakers’ offices and occupying the House Chamber.

Some, like the Instagram account @homegrownterrorists, amassed huge followings in a few hours. When posters believe they’ve identified someone, the images are updated with names and details about the person — like their social media handle, hometown or job title.

The FBI has been attempting a similar tactic. The Washington field office tweeted dozens of images of rioters on Thursday, asking the public to help identify people. Through early Thursday, police said they arrested 69 people from at least 20 states and the District for charges ranging from unlawful entry of public property, to violating curfew and assaulting a police officer. The department is also offering a $1,000 reward for tips that lead to an arrest.

But even for some who haven’t yet been charged with a crime, the consequences have been swift for their crowdsourced identifications.

Paul Davis, a Dallas-area lawyer, was fired on Thursday from his position as associate general counsel and director of human resources at Goosehead Insurance after a Twitter user posted his Instagram story, showing Davis live-streaming outside the Capitol and talking about wanting to get inside. Davis said in the video that he had been tear-gassed.

A Chicago real estate brokerage firm confirmed that it had fired an agent, Libby Andrews, after receiving a “tremendous amount of outreach” regarding her posts on social media about “storming the Capitol.”

Andrews told the Chicago Tribune that she arrived at the Capitol after people had already broken in and didn’t realize what they were doing was illegal.

“I had no idea people were breaking in and that destruction was happening,” she told the Tribune.

Others have been suspended. A teacher in Allentown, Pa., was put on temporary leave while the school district completes an investigation into his participation in the melee. Brad Rukstales, the chief executive of Cogensia, a marketing data company in Chicago, was arrested on Wednesday for his involvement in the riots. In a statement on Twitter, Cogensia said it had placed Rukstales “on leave of absence while we assess further.”

Rukstales told WBBM that he was “in the wrong place at the wrong time and I regret my part in that.”

“Everything that happened yesterday I think was absolutely terrible,” Rukstales said.

A lieutenant sheriff in Bexar County, Tex., who has been on leave since October as the department investigates allegations of an inappropriate relationship with an inmate, is under a second investigation after she posted multiple images of breaking into the Capitol on her Facebook account, according to KSAT. A Sanford, Fla., firefighter is also on administrative leave and under investigation after he was spotted among the mob in photographs, according to the Orlando Sentinel.

By early Friday, other videos continued to go viral of rioters boasting about their participation and even identifying themselves.

A recording on Facebook Live from Jenny Cudd, a small-business owner who in 2019 mounted a failed mayoral campaign in Midland, Tex., went viral on Twitter, amassing nearly 4 million views as of early Friday. In it, Cudd boasted about breaking into the office of House Speaker Nancy Pelosi (D-Calif.).

The Washington Post’s Fredrick Kunkle contributed to this report.