Katherine Johnson: The NASA ‘Computer’ Who Launched a Man into Space and Women Into STEM 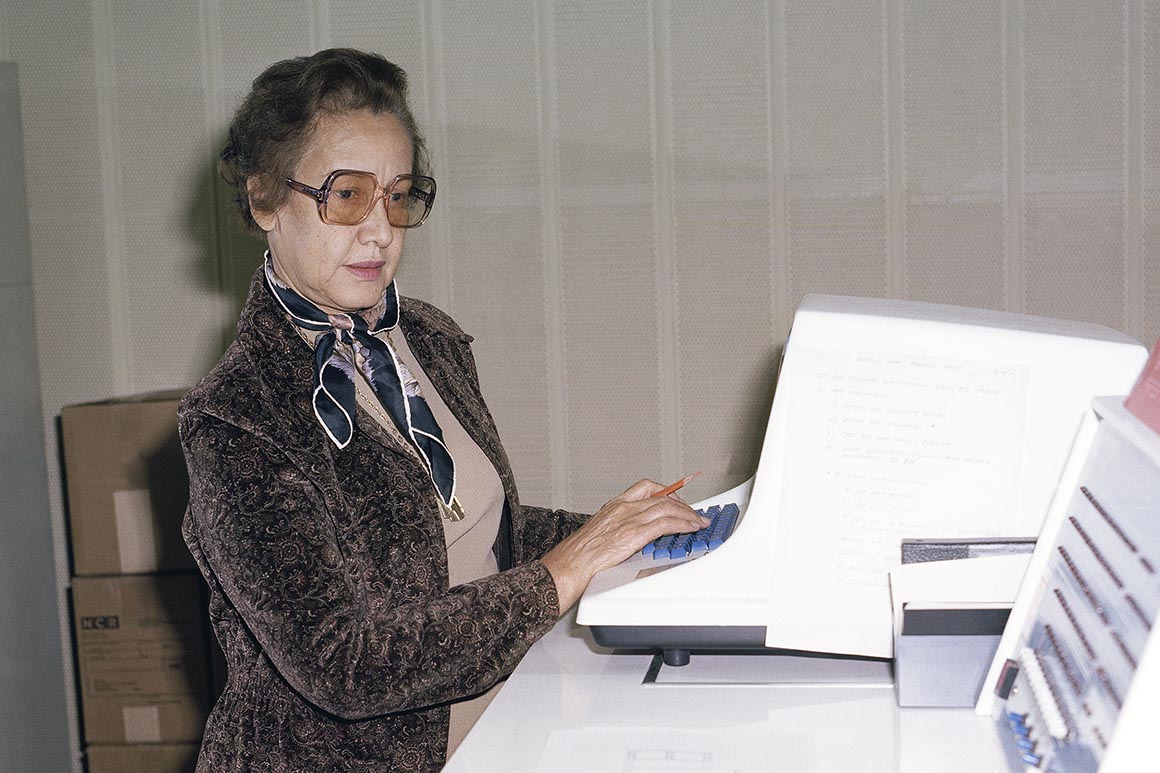 At the time, Johnson’s pivotal contribution to human spaceflight was known within NASA, as well as in the tight-knit community of African Americans she knew in the Hampton Roads, Virginia, area — many of whom, like her, worked at NASA’s Langley research facility. In the world at large, Johnson was mostly unsung. But her renown grew, and by the time she died this year, at 101, she had become a household name. In 2015, she was awarded the Presidential Medal of Freedom; in 2016, the actor Taraji P. Henson portrayed her in the film adaptation of Margot Lee Shetterly’s best-selling book, Hidden Figures. It does not detract from Johnson’s genius to say that in her life of stunning achievement — and her long-overdue fame — she also represented a cohort of women who pioneered the STEM field in the mid-20th century, and who are only now beginning to receive credit.

Make no mistake: Katherine Johnson was a genius. As Shetterly puts it, she was a “black girl from rural West Virginia, born at a time when the odds were more likely that she would die before age thirty-five than even finish high school.” Born in 1918, Johnson was a precocious child who counted everything from stars to stair steps. She received a full academic scholarship to the historically Black West Virginia State College, from which she graduated summa cum laude with degrees in math and French. In 1940, after a stint as a teacher, she became one of three exceptional Black students selected to integrate the graduate school at all-white West Virginia University. She was hired in 1953 to work at what was then called NACA, the National Advisory Committee for Aeronautics, where she was quickly snapped up by the Flight Research Division.

At Langley, she joined a community of female mathematicians, Black and white, that dated back to (and even a little before) World War II, when the center’s chief research mission was to ensure that Allied fighter planes, transports and bombers performed safely and well. Elsewhere during the war, other women did brain work to advance the Allied effort at a time when the STEM field was getting off the ground — so to speak — with huge advances in fields like radar, rocketry, computer science and communications technology. As men departed for fighting in nearly every corner of the world, women were called to participate in a major way, driving and developing these advances. As a result, World War II marked the first time in U.S. history that educated women were not only recruited but competed for. Great tragedy created great opportunity. In late 1941, the U.S. Navy generated a memo citing “women’s colleges” as a “new source” of talent for its burgeoning code breaking force. Companies like Hercules Powder and Armstrong Cork hired female physicists and chemists. At Aberdeen Proving Ground in Maryland, the U.S. Army engaged female computers to draw up ballistics trajectory tables. It was women who programmed the Army’s ENIAC computer, though they were not invited to the formal unveiling or the celebratory dinner.

As Shetterly points out, by midcentury, “There was virtually no aspect of twentieth-century defense technology that had not been touched by the hands and minds of female mathematicians.”

After the war, many of these women were shouldered out of the private sector. In corporate America, the intent had never been to employ women on a permanent basis; the “girls” were considered a temporary replacement for men, who began flooding into the lucrative tech industry, where “computer” now meant not an underpaid female paraprofessional, but an expensive piece of hardware. In this environment, the U.S. government — now fighting a Cold War — was a bit more open to female talent than the business world. In 1958, NACA became NASA; the mission expanded to embrace space; and that’s when Johnson began her work for the space task force, calculating the trajectories of spacecraft. Her reputation for accuracy was such that, in February 1962, as John Glenn prepared to realize the mission of orbiting Earth, he asked that the computer’s calculations be verified by her. “Get the girl to check the numbers,” he said.

If he had forgotten her name, history will not: There is now a Katherine G. Johnson Computational Research Facility at NASA. Johnson — most proud of her work on the Apollo moon mission — also has a satellite named for her and, of course, a Barbie, complete with shirtwaist dress, badge and glasses. Women’s contributions to computer science are finally being commemorated in a public way. In 2017, a residential college at Yale was named for Rear Admiral Grace Hopper, who joined the U.S. Naval Reserve during World War II, and helped develop the Mark I computer and the programming language COBOL. This year, the U.S. Coast Guard announced it is naming a cutter after Elizebeth Smith Friedman, a legendary code breaker who served before and during the war. Their work — and belated recognition — underscores the absurdity of any question whether women “belong” in modern computing; fact is, it was women like Katherine Johnson who helped create it.