NC State football will face Texas Tech under the lights on Saturday night.

The game is scheduled to begin at 7 p.m. ET at Carter-Finley Stadium in Raleigh.

The No. 16 Wolfpack enters the game 2-0 overall after wins over ECU and Charleston Southern. The Red Raiders are also 2-0 after knocking off No. 25 Houston at home last week in double overtime.

0:32 — NC State linebacker Payton Wilson, back from injury, stops a run by Donovan Smith short of the first down to force a punt as time expires in the first quarter.

11:54 — NC State gets the ball in TT territory after forcing a punt. Wolfpack starts at the Red Raiders 43.

WHO IS DEMIE SUMO?How RB Demie Sumo went from an unknown to a rising star for NC State football

6:35 — SACK! NC State sophomore tackle CJ Clark gets to Smith on first down for a 2-yard loss.

4:40 — TOUCHDOWN! NC State cornerback Aydan White from Asheville gets his third career interception and runs it back 84 yards for a TD. NC State 20, Texas Tech 0

NC State goes into the break with a 13-point lead despite trailing the Red Raiders 136-108 in total yards. The Pack recovered a fumble, scored on a long pick-six and sacked Smith twice in a difference-making half for the defense.

Devin Leary has passed for only 38 yards in the first half, but the Pack is averaging 4.4 yards per carry with 83 yards rushing. Jordan Houston leads the way with 46 yards on eight carries.

10:02 — SACK! NC State’s Clark gets his second sack of the game, this time for an 8-yard loss on second down. Another stop forces Tech to punt and NC State’s next drive will start from its own 8.

1:23 — TOUCHBACK! Sumo-Karngbaye appeared to have a touchdown reception but he fumbled through the end zone, resulting in a touchback for Texas Tech after a 14-play, 90-yard drive.

14:48 — NC State stops Texas Tech on fourth-and-8 to force a turnover on downs and get the ball on the Red Raiders 38.

Sun Sep 18 , 2022
CHARLESTON, S.C. (WCSC) – Forecasts on Tropical Storm Fiona show continued uncertainty as computer models struggle to predict the path of the disorganized storm. Click here to download the free Live 5 First Alert Weather app. As of 5 a.m. Friday, the center of the storm was near latitude 15.7 […] 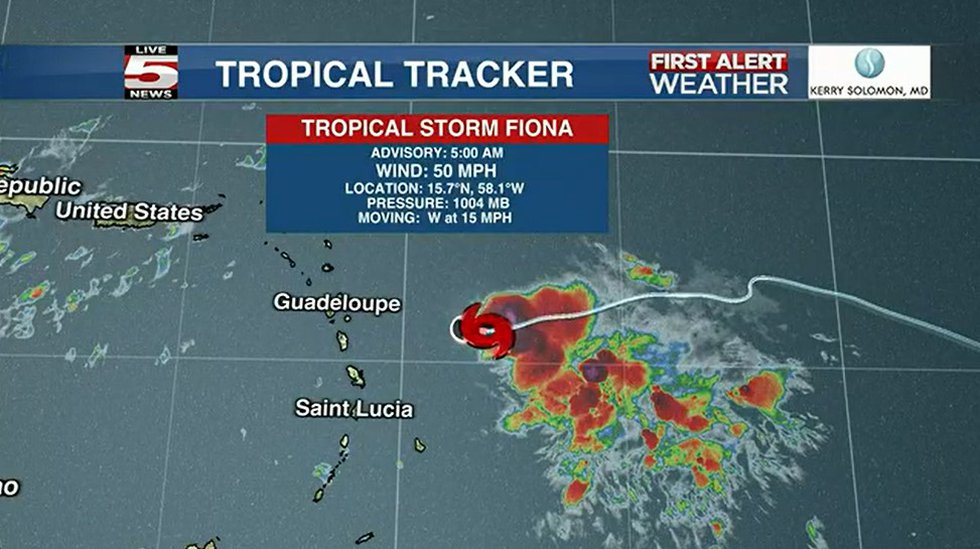