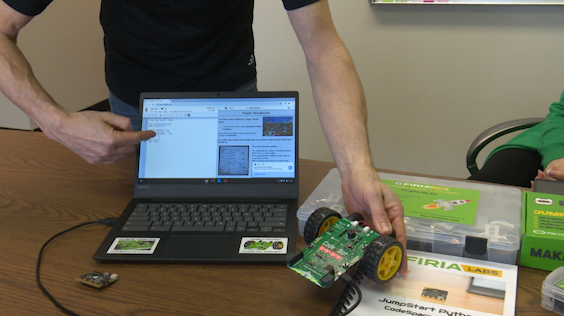 MADISON, Ala. – Technology invented in Madison is transforming public school kids into computer programmers across the nation.

The new technology is making it easier for rural schools to teach IT and computer science – starting as early as third grade.

“We build products that make it easy and accessible for a teacher who has no background in computer science to be able to bring computer science into the classroom,” said Geri Ewing with Firia Labs.

Geri and David Ewing developed the computer programming technology at their labratories in Madison.

Thanks to a private grant, they’re now able to teach 100 school teachers – more than half of those in Alabama, how to apply the technology in classrooms.

“They are absolutely on fire,” Geri Ewing said. “We even had one particular teacher after the training, sent to us, she says, ‘you know Geri, I was so overwhelmed, even my principal knew that I was just on the brink of basically falling apart and here you guys come along and show me what I can do, she says, ‘I can now turn the corner.’”

With their equipment, students are able to program various devices from scratch.

“It is very important because computer science touches all of our everyday lives from being able to scan objects in the grocery store to being able to calculate the trajectory of rockets into space,” Doran said. “It touches every aspect. We’re all concerned about cyber security and protecting our health and personal information.”

Doran has been teaching computer science at Priceville High School for four years. She says the technology has been helpful in expanding her curriculum. “They’re very important because students need to have the visual feedback through the microbits because they can hear sounds and see images, program games and get feedback with them,” Doran said.

Firia Labs have implemented their technology in 32 states and six countries.