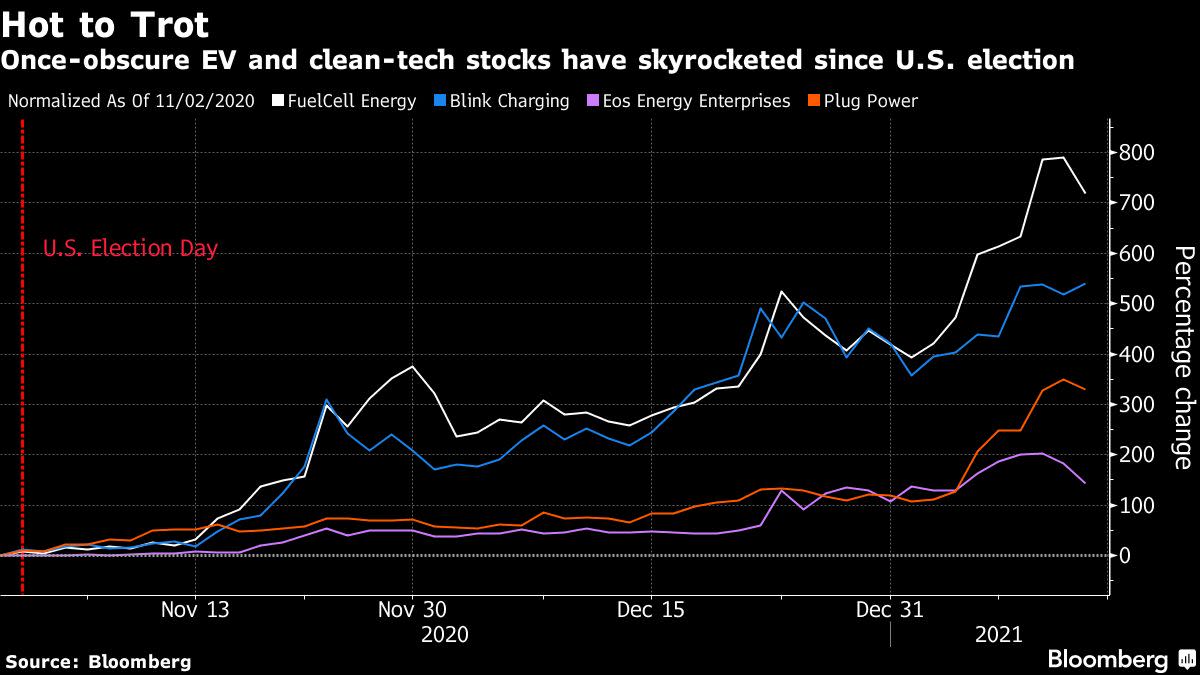 (Bloomberg) — Fuelcell Energy Inc., a clean-energy developer that hasn’t reported an annual profit in 20 years, is hardly a household name. But thanks to the mania for green stocks, the company’s market value has soared 800% in recent months to reach $5.6 billion.

It’s not alone. Since November, a wave of once-obscure clean-energy companies have seen their valuations skyrocket into the billions — despite generating little or no net income. Some of them are riding Tesla Inc.’s coattails after the industry giant’s own market capitalization reached a record $834 billion this month, topping that of Facebook Inc. Others have struck potentially lucrative partnerships or are simply surging on Wall Street’s confidence in a green transition under President-Elect Joe Biden.

“A relatively small portion of these gains have come from actual increases in earnings or cash flow,” said Pavel Molchanov, an energy analyst at Raymond James. “It’s really coming more from lofty expectations of growth in the future, and in some cases the distant future.”

Here’s a look at some of the companies whose stocks have rallied the most in recent months.

FuelCell Energy Inc., founded in 1969, was a pioneer in commercializing devices that generate electricity through an electro-chemical process. But it hasn’t recorded an annual profit since 1997 and was nearly insolvent 19 months ago. The shares began rising sharply in mid-November as interest in hydrogen and fuel cells in general was surging. The company’s value has increased seven-fold since and now exceeds $5 billion even as its third-quarter revenue fell 18% from a year earlier. FuelCell didn’t respond to a request for comment.

Blink, which sells and operates electric car charging stations, has never booked an annual profit and posted revenue of $905,000 for the three months ended in September 2020. The company’s shares began jumping in mid-November and have climbed nearly four-fold since, pushing its market value to $1.9 billion. Several short sellers have raised questions about the size of Blink’s charging network. Earlier this month, its chairman and chief executive officer, Michael D. Farkas, sold $22.1 million in shares, according to a filing with the U.S. Securities & Exchange Commission.

“There have been and always will be naysayers,” Farkas said in a statement. “The stock has performed well as investors have gained increased confidence about the universal shift to electric vehicles that is beginning to occur.” The company previously called the short-seller reports “false and defamatory.”​

Plug Power, Inc., founded in 1997, has spent decades struggling to turn a profit as it tries to carve out niche for hydrogen fuel cells that can produce electricity without greenhouse gas emissions. Now, as interest in hydrogen booms and Plug has announced a series of deals, its market cap has jumped from less than $1 billion in 2019 to more than $30 billion today. The stock began climbing in June, when Plug jumped into the business of producing and distributing hydrogen — in addition to building fuel cells — through two acquisitions. The shares took off in earnest earlier this month, after Plug announced a $1.5 billion investment from South Korea’s SK Group to promote the technology across Asia.

“The increase in stock value is a strong indication of the global transition to a clean economy and hydrogen,” said Plug Chief Executive Andy Marsh.

Electric-car battery developer QuantumScape Corp. saw its stock more than triple after it merged in late November with a blank-check company. That pushed its market valuation to a high of nearly $50 billion last month, even though the company isn’t expected to begin production of its solid-state lithium-metal batteries until the second half of 2024. Since then, the shares have dipped, falling more than 60% from the record high. The company is backed by Volkswagen AG, as well as Bill Gates and Khosla Ventures. QuantumScape didn’t respond to a request for comment.

Eos Energy Enterprises Inc., founded in 2008, makes grid-scale batteries based on zinc, challenging the lithium-ion chemistry that now dominates the battery market. It went public via a special purpose acquisition company in November, and its valuation has skyrocketed from about $240 million to a high of $1.5 billion, though it has yet to turn a profit. The shares tumbled last week after a report from short-seller Iceberg Research questioned some of Eos’s customers and their ability to pay.

The company declined to comment on the report. “Eos continues to execute on its long-term strategy to build a world class energy storage company,” it said in a statement.

For more articles like this, please visit us at bloomberg.com

Subscribe now to stay ahead with the most trusted business news source.