It makes sense that politicians would have the best video chat gear, right? Nobody has more to gain from looking good on video, and nobody has more to lose from a dropped call, low-res cameras, or that thing where you can only hear half the words they say and you end up making Bitcoin the official currency of the United States. Zoom diplomacy is the name of the game these days, and you have to bring your best game. Plus, high-level government officials have been doing video calls around the world for many years. They know how this works.

Gas prices are declining at one of the fastest rates we have seen in over a decade – we’re not letting up on our work to lower costs even further. pic.twitter.com/suEKuKXyKP

I’m pretty sure Biden is looking at a Neat Board, which is made by a Norwegian company that’s only a couple of years old. The board is a dedicated video and collaboration gadget with a 65-inch 4K screen, an integrated touchscreen and whiteboard tool, and a 12-megapixel camera with 4x digital zoom. It’s a lot like Google’s Jamboard or Microsoft’s Surface Hub, and Neat’s gear works with both Teams and Zoom. (This one’s on Zoom, it appears, as the White House has been using Zoom for Government for a while.) The whole rig in front of Biden is about six feet tall and weighs about 125 pounds. It also costs $7,280 as he has it configured — though he doesn’t appear to be using the $760 Scheduling Display or the $760 Controller, so he’s exercising some fiscal responsibility there.

The White House must like the device because it’s been in use in the Oval Office since right after Biden’s inauguration, rolling and swiveling to either face the couch in the office or Biden at the Resolute Desk. Neat confirmed at the time that it was in fact a Neat Board, though the company seemed surprised to see its product in the Oval Office. (The company hasn’t responded to my request for comment.) The whole setup is impressive, with Biden looking comfortable at his desk and with the camera an ideal distance away so he looks engaged but the participants aren’t staring up his nose.

I do have a couple of notes, though, Mr. President, if I may. For one thing, you really need a mic on your desk: you’re a long way away from the microphone, and I know Zoom and its partners have gotten better at isolating audio, but you’re still going to sound like you’re shouting from the other side of a football field. Maybe replace one of those two desk phones with a dedicated Zoom mic? (Or just build one right into the desk, and into the Resolute Desk in the Oval Office. I’m sure Rutherford B. Hayes wouldn’t mind.) Also, bring a couple more things into your background, so it’s not just a flat-looking wall behind you. Maybe a plant or, I don’t know, those enormous flags that usually sit right behind you. And while I’m being picky, I might clean up the desk a little. Or at least put your coffee cup on a coaster.

There are video conferencing rigs of all sorts around the White House these days. For the most official and highest stakes moments, Biden seems to prefer to set up a high-end camera and feed that into Zoom, much like he’s giving a standard TV broadcast. But, in the Roosevelt Room, there’s a pretty standard camera above a TV conferencing rig, and Biden seems to always sit at the head of the table facing it. (Also, there are mics on the table!) The Situation Room has a dedicated setup, and there’s a camera and a Sharp TV built into the wall at Camp David as well. If this whole “democracy” thing doesn’t work out, the White House would make a terrific WeWork.

I tried to figure out how Biden’s setup compared to former President Donald Trump’s, mostly to no avail. Pre-pandemic, Trump did video conferences from a hulking rig in Mar-a-Lago, but during the pandemic… I can’t find much. Trump did plenty of video conferencing, including from the Oval Office, but there’s much less evidence of what he used. Looking at how he looks in various videos and Zoom grids, though, it certainly looks like he favors the fancy camera approach. And it appears he preferred regular phone calls anyway.

For a more achievable presidential Zoom rig, I might recommend former President Barack Obama’s setup: an iPad on a stand. In a recent video, you can see Obama video chatting from his desk with an iPad Pro on an adjustable desk stand. I can’t say with total certainty, but I think it’s the Lisen Tablet Stand, which you can get for $24 on Amazon. It’s not quite as nice a setup as Biden’s, and we here at The Verge continue to have mixed feelings about Center Stage on the iPad, but it’s still definitely better than your laptop.

Oh, and here’s the most important lesson you can learn from presidential Zoom behavior: turn off your self view. In practically every video conference I could find, Biden’s own feed wasn’t on the screen. It’s good for your mental health, it’s good for your focus, and it’s just better than staring at yourself all day. None of us need to see more of our own face, even when we’re president.

Tue Jul 26 , 2022
WASHINGTON (AP) — Calling semiconductors “the building blocks for the modern economy,” President Joe Biden on Monday asked Congress to move quickly and send him a bipartisan bill designed to boost the computer chips industry and high-tech research in the United States. The Senate was originally expected to take a […] 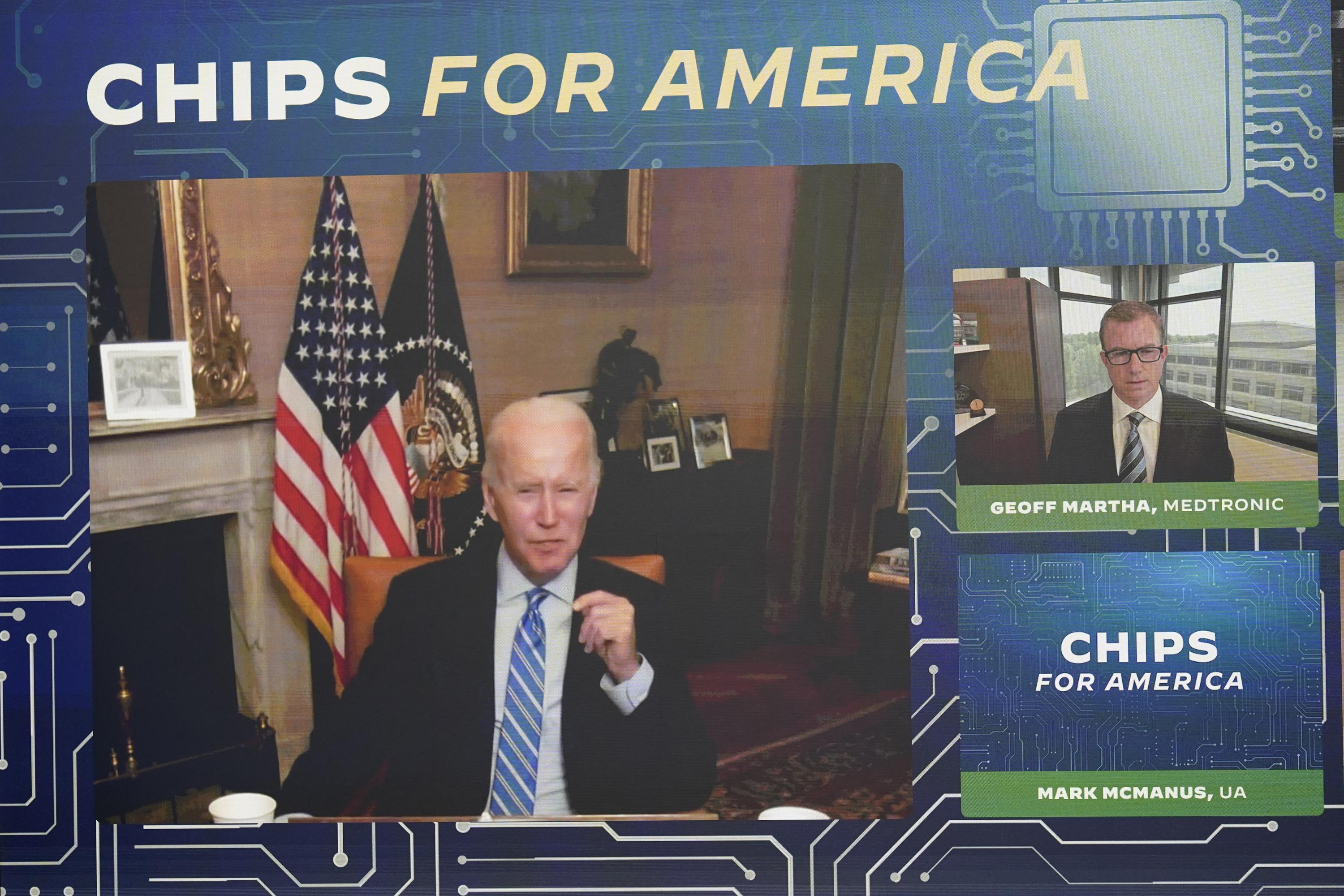