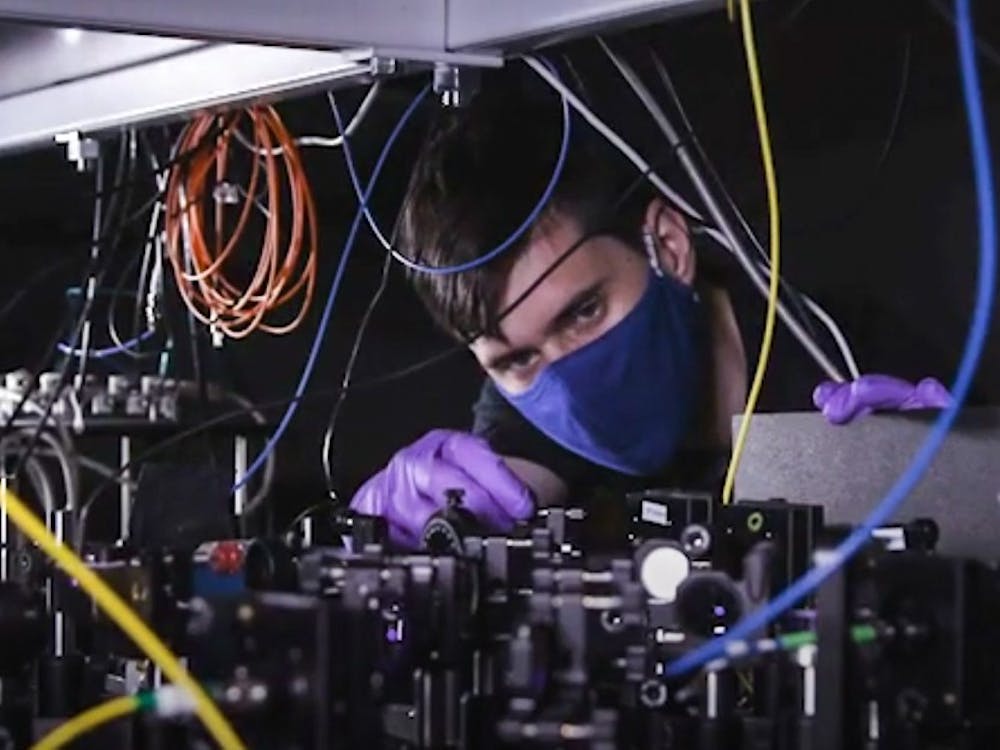 The center is anticipated to reach an operational state in March 2021 as one of five new quantum research centers funded by a $115 million grant from the U.S. Department of Energy.

The ultimate goal of the project is to present a prototype of quantum systems equipped for advances in areas including computing, physics and chemistry.

A quantum computer is a machine that can process a huge number of possible outcomes at once, with the ability to address problems which are typically deemed too complex or dense even for supercomputers.

“Quantum computers process superpositions of numbers. It can compute many things at the same time because the computer is a quantum thing and exists in multiple states at the same time,” said Chris Monroe, a professor of electrical and computer engineering and physics who recently joined Duke’s quantum computing team. “Not all applications work well, but some of them do, like optimization problems where there is one answer to the question.”

These quantum computers allow researchers to pick up many long-abandoned problems, such as the construction of weather system models and the prediction of financial markets.

Duke’s team includes a variety of experts. Its roots can be traced back to Jungsang Kim, a professor in the department of electrical and computer engineering, and his proposition of an optical approach to ion trapping, which is “holding a charged atom in place with electromagnetic fields and manipulating them with laser light.”

This led to Duke launching its first quantum information lab.

The team will further expand this year with the addition of physicist Marko Cetina; quantum experimentalist Crystal Noel; and Chris Monroe, architect of the U.S. National Quantum Initiative.

Each of the team’s experts specializes in a different area. Kim is skilled in quantum optics; Cetina is focused on ion traps and cold neutral atoms; Noel works on trapped ion systems,; and Monroe contributes his knowledge on combating noise processes in ion traps, which can cause quantum systems to falter.

Get The Chronicle straight to your inbox

Signup for our editorially curated, weekly newsletter. Cancel at any time.

The DQC will fabricate quantum computer systems based on trapped ions, and the Duke quantum archetype will be uniquely tailored for research. Users will be able to inspect the core of the system and collaborate in their research.

The team of experts at the center are also collaborating with researchers at other institutions with the shared goal of improving the next generation of quantum computers.

Duke’s researchers are employing an approach using qubits, short for “quantum bits,” made from individual atomic ions in a vacuum. Qubits are the basic unit of quantum information, and their use can bring the vision of a scalable quantum computer to fruition. Duke’s quantum computing team is using ytterbium atoms for the trapped ions.

The current system uses 20 qubits, and along with the construction of the new center, the team will pursue a 50-qubit system, as well as smaller systems. By using trapped ion qubits, which simultaneously exist in multiple states, these quantum systems have the power to perform incredibly quick computations.

Study areas for the team include quantum error correction, ion trapping and novel photonic devices. The research and foundational work done by DQC has already attracted interest from institutions including the Georgia Institute of Technology and Harvard University for the use of the SQLab to test research ideas.

“We’re interested in doing science and having collaborators that want to run interesting scientific applications; this is the place for them,” Monroe said.

Monroe said there is the potential for many complex interactions beyond the capabilities of traditional computers.

In the long run, the DQC wants to speed up the transfer of quantum computing technology from the lab to the market and increase its accessibility, ultimately aiming to “put quantum computers directly into the hands of users,” Monroe said.

The chief value of quantum computing centers is their ability to solve complex optimization problems, testing many possible solutions and eventually converging on a single answer. Fields that would benefit most from these applications include artificial intelligence, cybersecurity, and chemical, environmental, and financial systems.

Monroe pointed to understanding molecular design as one of the possible applications of quantum computing which most excites him. He explains that scientists lack a complete understanding of the workings of naturally occurring molecules that channel light with extraordinary efficiency, which is where quantum computers come in.

“If we can model how that works, maybe we could design new molecules to make better, more-efficient and cheaper molecules to harvest solar energy. That same type of computer program might be able to help you model chemical reactions, catalysis, to build better drugs,” Monroe said.

Monroe praised the University’s administration for their commitment to the project, citing it as a compelling reason to join.

“All the way to [Provost Sally Kornbluth] and [President Vincent Price] they’re totally behind this vision, and we’re going to do things in ways that nobody else is doing,” Monroe said.