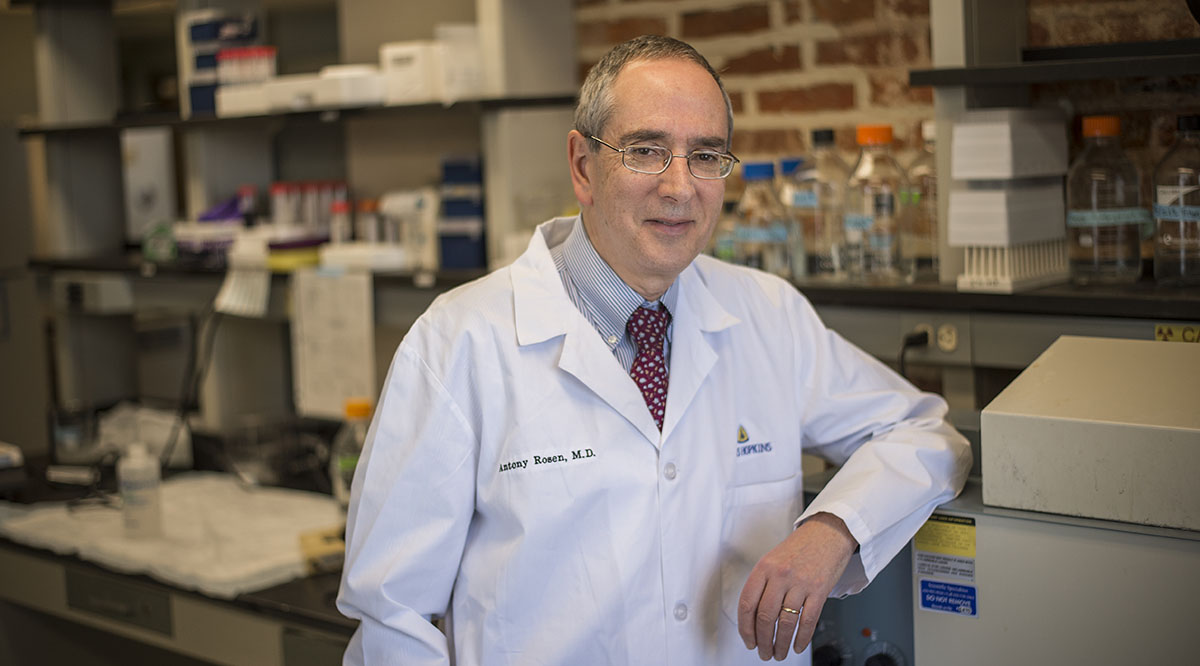 At a time when the faster and faster pace of technological advancements feels overwhelming to many people, Antony Rosen, MBChB, sees a historic opportunity.

The vice dean for research and professor of medicine at Johns Hopkins Medicine in Baltimore thinks that enormous increases in the power of technology can free researchers and physicians to focus on what they do best and pursue the passions that led them to medicine and science. Achieving that, however, will require academic medical institutions to fundamentally change how they support researchers and to foster more collaboration among scientists and clinicians.

Rosen discussed his ideas about building systems and structures around cutting-edge technology to create a new era of medical research and care. The conversation was edited for length and clarity.

You’ve said that academic medicine needs to change how it supports researchers, especially those early in their careers. Why do they need new forms of support?

There are multiple areas that have become increasingly challenging for emerging investigators over the past couple of decades. Research in general is much more complex. It has become much more regulated, and it’s complicated. For people who are entering the field to know exactly what to do to satisfy the requirements, this is a high bar to clear. Third, the old model of an investigator having the necessary skills on their own to answer big questions is no longer true. An investigator may be highly expert in one area, but the magic of discovery comes when disciplines meet and investigators collaborate outside their usual circles. To harness the skills of others is really important. And lastly, research is expensive. It’s difficult for people — especially those starting up — to find ways to pay for it.

Researchers and physicians spend a lot of time and brain power dealing with these challenges. They often cite managing more complex technology as a culprit, but you see technology as a way to free scientists and clinicians to pursue their passions.

Each of us brings a unique set of skills — a set of things we love to do and things we really aren’t that turned on by. The new world allows us to take more advantage of our individual uniqueness. I think that is the real opportunity in the digitally transformed world.

We’re having simultaneous technology revolutions — in measurement, computation, and connectivity — that are going much faster than the changes in other revolutions, like the Industrial Revolution. Instead of the mechanization of labor, as occurred in the Industrial Revolution, it’s the mechanization of mental processing. There may be a couple amongst us — not me — who have this extraordinary power of mental processing, but they’re very, very few. But AI [artificial intelligence] and new data science tools are bringing the power of super-fast computation to many more people — and the ability to integrate huge amounts of measurements in those computations.

How does having that technological power at hand transform the role of scientists and physicians?

What’s going to count is our ability to be creative with how we use that information, to be moral, to imagine, to have a society that is respectful of people’s unique abilities, to empathize with others. On the discovery side, this is going to be an absolutely golden age. We need to empower our people to be imaginative and creative.

But we have to learn how to do it. We have to make structures and systems that enable it.

What’s an example of how structures and systems can help?

Let’s look at data. There is tremendous inefficiency if everybody has to do their own setup for what should be a standard process of getting great quality data that derives from clinical care into a place where it is secure, accessible, and safely handled by researchers. And yet just about every researcher reinvented their own wheel by collecting data from various sources and creating a platform to analyze it.

About four years ago, Hopkins started a Precision Medicine Analytics Platform, which carries out that process for centers across the institution. It routinely collects data from the hospital system’s electronic medical records and numerous other sources, integrates the data, and makes it available in a format that can be used by research scientists. It also provides a shared set of templates and processes that can speed up people’s ability to move forward with research and answer questions.

The vision for the future is that data would be collected at the interface of a patient and the health system — that could be ambulatory data collected from wearable devices, data from an interaction with a physician — and brought into this large data lake. Remember, a lot of data is not of sufficient high quality at the moment. We have to design systems that ensure we are bringing high-quality, research-grade data onto the platform.

That sounds like it would require even more financing from universities.

The essence of moving science forward at pace is to provide talented investigators with access to high-quality measurements and analytic techniques. It’s not only universities that would do that, but the federal government would ideally encourage and enable it. This data foundation is essential for American science to thrive.

Another idea for supporting creativity is helping researchers test new ideas by expanding their access to the core labs, which have the high-end instruments, technologies, and expertise to carry out certain scientific functions for research projects throughout the institution. Hopkins does that through a currency called Core Coins. How does that work?

There are many investigators who have a fabulous idea. And that idea requires, for example, that they do a very high-end measurement and get some expertise in terms of analyzing the resulting data. But they can’t. For some of these things — like a single-cell RNA-sequencing experiment — the investigator might need 10 to 20 thousand dollars. The major barrier to creativity is the ability to get access and resources to take a small chance on a big idea.

And that’s what these Core Coins are for: “Let’s ask this question.” Hopkins makes tranches of the currency available to investigators, who can spend them for core lab services. The idea is reviewed by the core lab [leaders], who might say, “That question could be appropriately answered by my core and the science looks great.” The university pays, the core does the work, the faculty member gets preliminary data and analysis that can jump-start a new study and grant proposal.

These ideas involve increased collaboration across teams and even disciplines. You’ve suggested that medical science needs a more “explicit social compact” to acknowledge the role that everyone plays.

There needs to be this recognition that many people contribute to the ability to understand and impact human disease. Teams work best if those contributions are explicitly recognized. It is not only the people who do the assay [a type of lab measurement] who are the key to discovery. It’s also the people who’ve seen the patients.

The people who are taking care of patients, identifying biological patterns, and tracking patient trajectories — they’re not just doing clinical work, they’re doing discovery. Our ability to be a highly productive discovery ecosystem requires that we recognize everybody’s role.

Throughout this conversation, you’ve displayed an optimistic prognosis about technology’s ability to help humans relate to each other, at a time when many people say technology is building walls between us. For example, some people would be puzzled when you say technology can help to increase empathy. How?

Medicine is a great example. Precision medicine is often thought of as an AI-driven process that’s going to tell people what they have and what the right treatment is. But human disease and human health are comprised of both biology and the spirit. There are always going to be diseases that threaten people’s lives, that threaten people’s livelihoods, that threaten the way that they live. And there is a big spirit component to that. It [medical care] is also about getting the patient to be productive, to be able to deal with uncertainty. The human role in healing is central and will remain so. Patients are still going to have choices: Am I going to go down path A or path B?

It’s easy for us to say old medicine is a thing of the past and now it’s only going to be driven by data and measurement. But the human interaction around health, around disease, and around dysfunction and mortality — those are still going to have a patient story behind them. Technology is going to amplify your processing ability and speed and therefore make space for you to manifest your ability to empathize, explain, help people make decisions that are appropriate to them.

Medicine has reached a stage where it’s going to be re-imagined and reengineered. That re-imagination and reengineering has got to focus on this interaction between a patient and caregiver. The need for that is never going to go away.