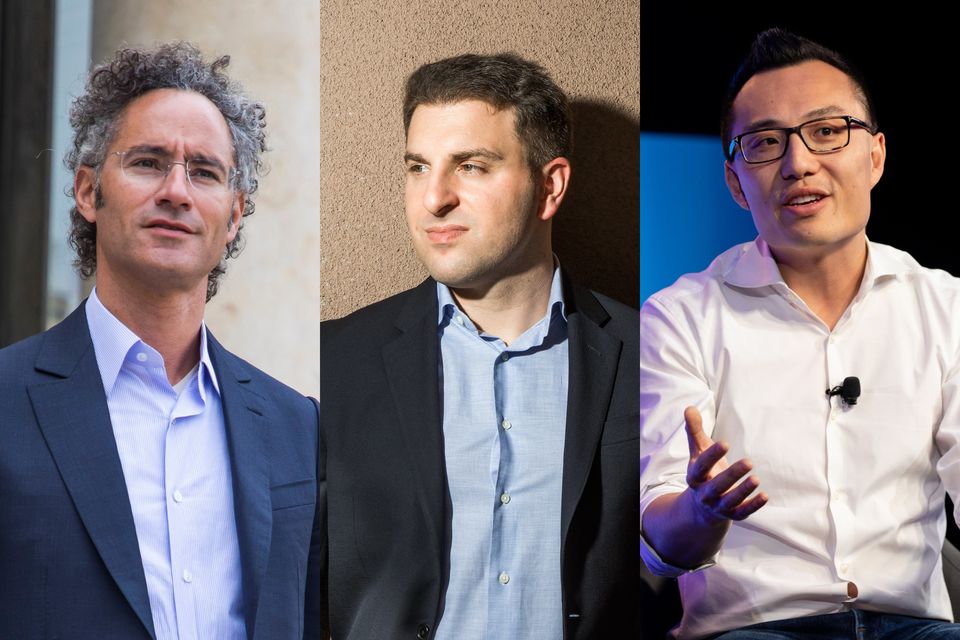 Demand for newly listed tech stocks is booming—and so, too, is the power of founders of the Silicon Valley companies.

In the run-up to this month’s listing of

the delivery company’s board gave co-founders 20 votes per share, up from one vote in the most recent investment round. At

the company’s co-founders’ votes per share doubled to 20 in recent months, according to securities filings. And the board of

formerly of Silicon Valley, geared up for its public listing this fall by bestowing the data-analysis company’s three founders with enough special shares that one of them can exert control with as little as 0.5% of the stock.

More than a decade ago, such share structures—in which leaders get more voting potency than other shareholders—were largely reserved for a tiny number of startups, typically the ones most coveted by investors, like Google and

Airbnb, DoorDash, Palantir and a string of other recent listings show how so-called founder control has effectively become the norm.

The moves by the large newly listed companies are stirring concern among proponents of strong corporate governance, particularly as they come just over a year after the failed IPO of WeWork Cos.

had full control over the business—so much so that potential investors jettisoned the offering after being spooked by his management style and the company’s mounting losses, among other issues. The high-profile debacle led many investors in Silicon Valley to question the wisdom of granting founders so much power early on. They worried that a measure once reserved for a handful of standouts was being shared too widely and without discernment. For instance, few of the large startups going public had ever produced an annual profit.

Now, the mood has shifted amid a sizzling market for IPOs—one where Airbnb’s shares more than doubled on their first day of trading. Investors say the strong market helps strengthen the hands of co-founders of hot tech companies that are going public, giving them greater leverage over those who push for more democratic structures where every shareholder has the same voting power.

The founder of artificial intelligence company

So far this year, 41.5% of the 41 tech companies that have gone public had dual-class shares, with one class holding higher voting potency than the other, said

a University of Florida business professor who tracks IPOs. That figure is just shy of the record 43.3% seen in 2017 and well above the 7.2% overall seen since 1980.

Both the CEO of DoorDash,

and the CEO of Wish,

said in interviews earlier this month that they didn’t receive any questions about their high-voting stock during meetings with investors before their IPOs.

Backers of founder control say it is appropriate to give some visionary CEOs room to experiment and take risks that Wall Street might not always appreciate.

a partner at Sequoia Capital who sits on the boards of both Airbnb and DoorDash, said in an interview earlier this month that those firms’ CEOs have proven they are responsible after years of expansion.

“They have earned the right to have that control,” he said. Smart, strong-willed founders should be able to focus on “building an enduring business rather than a short-term business focused on quarter-to-quarter results,” he said.

Many adherents of strong corporate governance question the shift. Some marquee stock indexes like the S&P 500 won’t include new companies that have multiple classes of shares, while shareholder groups like the Council of Institutional Investors advocate against it because it hinders accountability for corporate leadership.

The rise in founder control cuts against the general trend elsewhere in corporate America, where shareholders in recent decades have been gaining a bigger say, said

vice chair at ValueEdge Advisors and a longtime advocate for shareholder rights. Corporations have increasingly adopted measures like annual rather than staggered board elections to give shareholders more ability to influence matters like CEO pay, Ms. Minow said.

Founder control—where investors effectively hand over the keys of giant companies to a single person or small group—brings large new risks for shareholders. Even a competent founder can tire of their job, Ms. Minow said, yet shareholders of companies where founders have outsize control wouldn’t have any real ability to unseat the CEO.

“I want them to be on their toes all the time,” she said, rather than mimicking a monarchy. “For all its faults, democracy is a better way.”

Besieged with demand from investors, founders were able to dictate terms of funding rounds, said

an associate dean at Boston College Law School who has researched governance at large startups.

“There’s more money than there are good deals,” she said, leading to persuasive or compelling founders having the upper hand in negotiations and leverage over how much control they want.

Such structures, she said, are precarious, and have led to a series of high-profile missteps like WeWork, given the lack of oversight.

“Nobody has power but the founder, and there’s very little accountability,” she said.

So far, the trend looks set to continue. Of the tech companies that have filed to go public recently, videogame startup Roblox Corp. and financial tech company Affirm Holdings Inc. have given founders 20 votes per share. Poshmark Inc., a used clothing seller, has granted its founder and some early investors 10 votes per share.

—Maureen Farrell and Heather Somerville contributed to this article.