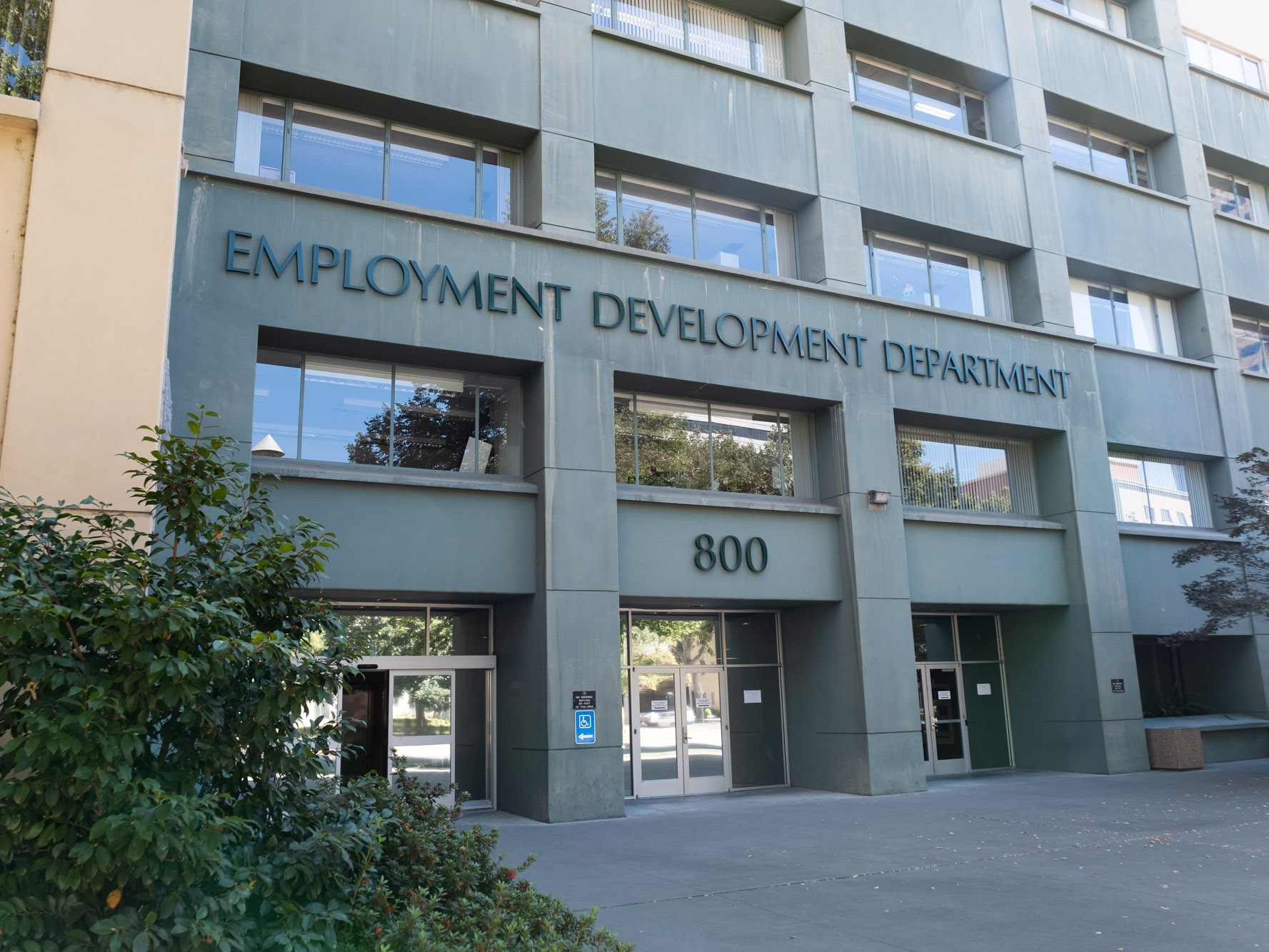 As Gavin Newsom enters the second half of his term as California governor, CapRadio is taking a deep look at Newsom’s performance, progress and policies. Find all of our stories here.

Like millions of Californians, Mary Montgomery turned to unemployment insurance in recent months to help make ends meet, as the Sacramento sushi restaurant where she worked opened and closed during the pandemic.

She considered herself lucky. Sure, there were long hold times when she called the state’s hotline for assistance. But her benefits were deposited on time, and she wasn’t swept up in the growing backlog of claims.

“It says that I have over five thousand dollars that I should be able to use, but there’s no way for me to use that money,” she said.

Montgomery has been experiencing one of many technical problems shaking up the EDD system since the start of the pandemic. These hiccups have a ripple effect on California households, and they tell a tale of the state government’s struggle to modernize its technology. It’s a dilemma that has loomed over Newsom’s first two years as governor.

Newsom is a high-tech evangelist. He entered office with the promise of ramping up the public sector to private-sector speed, and then using that modernization to make government more transparent.

His 2013 book,“Citizenville: How to Take the Town Square Digital and Reinvent Government,” serves as a manifesto. Its thesis says governments need to be tech-savvy and open their vast troves of data to the public. In turn, people will become more engaged in the civic process.

It’s a philosophy that’s defined Newsom’s political career, dating back to his days as mayor of San Francisco. But modernizing state government — with its many bureaucracies  and ancient computer systems — has proven a herculean task, one that he recognized going into the job.

“Fixing the disastrous state of its current tech systems is government’s greatest challenge,” he wrote in “Citizenville.”

Newsom has had some tech successes, especially when his administration built systems from scratch or partnered with Silicon Valley companies. But the pandemic has exposed the dangers of placing 21st-century demands on decades-old technology.

Amy Tong, California’s Chief Information Officer and director of the state Department of Technology, doesn’t deny the state faces vexing tech problems in the short-term. But she says Newsom is playing the long game.

“Citizenville” bemoaned the state of government technology infrastructure in 2013. Nearly a decade later, it appears the situation hasn’t gotten much better.

During his latest budget unveiling in January, Newsom acknowledged California’s had a long history of technological foibles.

“I wrote a book about being on the leading, cutting-edge of 1976 in terms of IT,” he said. “And trust me, that’s been made abundantly clear to not just me [but] to all of you in this last year.”

The department has spent the last 10 months whipsawing from one failure to another.

There’s a backlog of about a million claims. And then there’s rampant fraud that could total more than $30 billion.

In an effort to stop that fraud, the state suspended over a million claims. But that likely swept up legitimate beneficiaries, such as Montgomery.

“If my restaurant closes tomorrow and I have no work for two weeks, being unable to rely on unemployment is very scary,” she said. “It’s a question of whether or not some bills can get paid, if I can buy groceries.”

Newsom appointed one of his “strike teams” to identify solutions, and there have been some short-term improvements. EDD implemented a new ID verification system, which it says stopped up to $60 billion in additional fraudulent claims. It also developed a new online dashboard that tracks the department’s latest statistics — through PDFs, a non-interactive format.

EDD’s computer system is exactly the type of old technology the governor has railed against for years. It relies on a programming language — COBOL — that’s over 60 years old. What’s ultimately needed, according to the strike team, is an overhaul of the department’s information technology.

The recommendation is in line with Newsom’s thesis in “Citizenville.” In a borrowed metaphor, he likened most government technology to a vending machine on the fritz.

“The predictable answer would be ‘Fix the vending machine!’” he wrote. “But the better answer is to throw it out altogether.”

The problem is, many Californians are still clamoring to get assistance from that faulty vending machine.

How Newsom’s administration will overhaul the system while keeping it running, and figure out exactly how much it will cost, remains unclear.

While it took a pandemic-induced recession to show the catastrophic consequences of a feeble unemployment insurance system, it also set the stage for some of Newsom’s tech successes, including tracking the spread and impact of COVID-19.

“Generally speaking, it’s done a good job for the population as a whole, and for major ethnic racial groups,” she said.

There have been some hiccups, including a glitch over the summer that resulted in a substantial undercount in COVID-19 cases. But Ponce says the data by and large has been reliable.

Her main criticism is over the state’s reluctance to release the more granular data it already collects about the virus’s spread among ethnic and racial communities.

“For the Asian-American category, there’s no public-facing data that shows what the case rates and death rates are for Chinese, for Filipinos, for Japanese [or] for Vietnamese,” she said.

To get that data, her team has to file time-consuming public records requests. She says that makes it harder to identify trends within at-risk communities, and advocate for their needs.

This isn’t the only instance when Newsom’s administration has shielded information from researchers and the public. Until recently, the state withheld the formula used to determine the most recent stay-at-home orders.

Tong, the state’s Chief Information Officer, points to Newsom’s willingness to form partnerships with Silicon Valley as another success during the pandemic.

“It’s a partnership with Google and Apple,” Tong said. “It’s an exposure notification [app], and we piloted it with all the UC campuses to begin with.”

The state has also partnered with Alphabet Inc., Google’s parent company, to expand testing in California through Project Baseline.

Tong says other tech achievements under Newsom are less visible to the public.

Under a new law in 2019, the state had to make its website accessible for the visually impaired.  Many departments struggled to meet the requirement. So, instead of making all information accessible, they began dumping millions of online documents, as reported by the Sacramento Bee.

Tong says her office stepped in and helped build an artificial intelligence bot to scan and convert those documents.

She says some of the documents removed online were duplicates. Her department is continuing to work on the effort.

Another example, way down in the bureaucratic bowels, is a new procurement system launched under Newsom.

Request for Innovative Ideas, or RFI2, invites vendors to propose novel solutions to government problems. It inverts the traditional procurement model, in which the state proposes a solution and vendors bid on the job.

Tong says the new model has substantially reduced the procurement time for obtaining new technology, from around 18 months down to three or four months. She says competitive procurement has also taken place in as little as 10 days during the pandemic.

Newsom’s disdain for the traditional procurement model is no secret. In “Citizenville,” he writes that it’s too dependent on “backslapping and networking.”

But his instinct to move quickly and avoid the “evils of procurement” has also gotten him into hot water. At the start of the pandemic, he negotiated a $990 million dollar deal with Chinese manufacturer BYD to deliver much-needed N95 and surgical masks.

The contract circumvented the traditional procurement process, and lawmakers argued they should have been involved in the decision. Many say they first found out about the deal when Newsom announced it on a cable news show.

Tong says modernizing the big, seemingly intractable technology underpinning much of state government means swapping it out for “modular” IT — or large systems made up of smaller pieces.

“So that when you start maintaining them or updating them, you do not need to update the entire system,” she said. “It becomes a lot more nimble.”

She says that kind of tech shift is what’s happening at the DMV. Newsom identified the department early on in his term as a target for tech reform.

His DMV strike team has made some strides toward improving the department — updating its website, enabling more payment types and reducing wait times when offices were still open. However, the system has remained largely untested by the masses during the pandemic.

Making the technology more modular isn’t just a matter of acquiring new hardware and building new widgets. Tong says it’s also about changing the “hearts and minds” of public employees who are used to doing things a certain way.

“[Government] can only go so fast on the technology side to the degree that our culture … keeps up with that pace,” Tong said.

To encourage this cultural shift, Newsom created the Office of Digital Innovation shortly after taking office.

He allocated $40 million dollars to get the department started, with potentially millions more in this year’s budget.

Standing up the new division has taken time; it took until May of last year to appoint a director.

It’s already jumped on a few projects, including a prototyped redesign of the state government’s website.

The home page says the site “is a work in progress.”