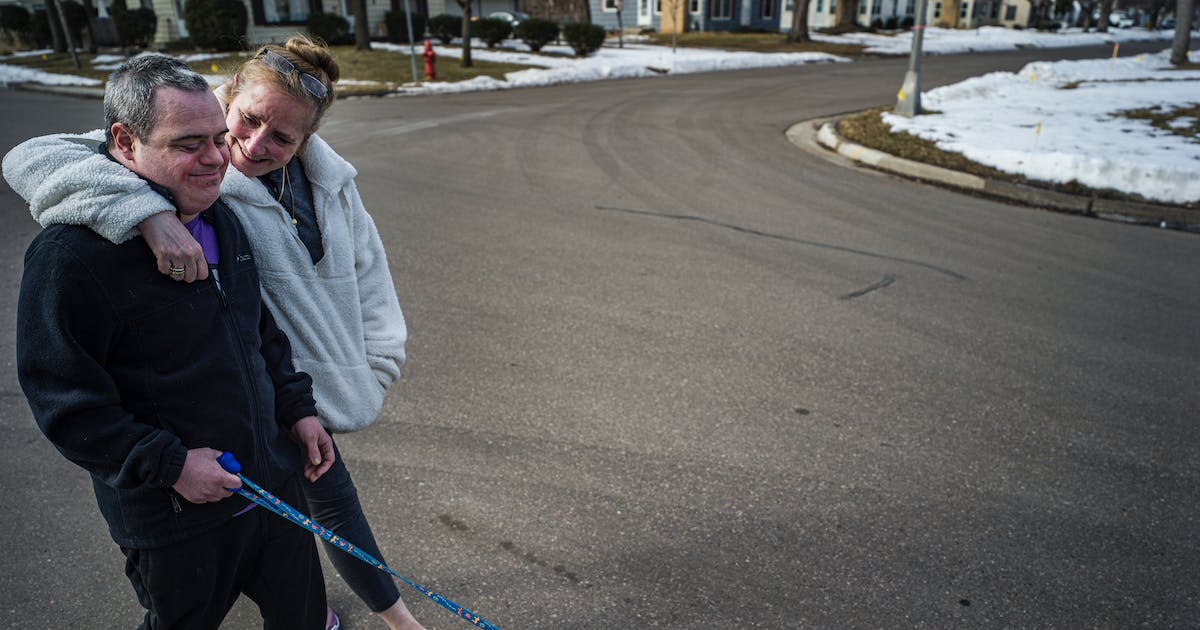 After weeks of anxious waiting, Heidi Randolph packed her bags to fly to Philadelphia to get the coronavirus vaccine for her adult son, who has Down syndrome and several high-risk medical conditions, including chronic lung disease.

Then came a breakthrough. Randolph learned last week that extra doses of the Moderna vaccine were available at a pharmacy in the small town of Lisbon, N.D., and that her son was eligible to receive a shot under that state’s more relaxed vaccine requirements.

Randolph, who lives in Richfield, quickly booked an appointment online, canceled her flight to the East Coast, and days later hit the road in her Buick with her 38-year-old son, Sam Corbett, and their pet Chihuahua for the 270-mile drive to Lisbon.

“It was such a relief that I seriously wanted to cry,” said Randolph, hours after they returned home Tuesday after getting the initial dose. “I can take a deep breath just knowing that my son will probably be OK and not collapse one day from respiratory failure.”

While Minnesota recently expanded access to the potentially lifesaving shots, uncertainty about when they will be available has given rise to a booming new form of travel, known as “vaccine tourism,” in which thousands of Minnesotans cross state lines — to destinations as far away as Arizona, Florida and Missouri — for quicker results.

These long-distance quests stem from a dizzying patchwork of state rules for distributing the vaccines and the lack of coordinated, national standards. They are also fueled by a widespread fear that state or pharmacy eligibility rules can change at any moment — and that one must act quickly and decisively before the opportunity to get the scarce doses vanishes.

Over the past few weeks, for instance, so many Minnesotans poured into North Dakota for shots that one of the state’s largest pharmacy chains, Thifty White, changed its policy to limit doses to in-state residents only.

To date, more than 15,000 Minnesotans have crossed state lines to get shots, according to data from the state Department of Health. And slightly more than 26,000 people from other states have traveled to Minnesota to get vaccinated.

But this new type of pandemic travel has raised ethical concerns and worries that it might be contributing to inequities in vaccine distribution. Nationally, Blacks and Hispanics are receiving a much smaller share of vaccinations than the overall population, according to a new analysis by the Kaiser Family Foundation.

“It speaks to the failure of our vaccine distribution system that people are being set up in this ‘hunter-like’ game,” said Tetyana Shippee, a professor at the University of Minnesota’s School of Public Health. “In the end, individuals with the most privilege — those with jobs and resources that enable them to drive great distances and those tech-savvy enough to use these new technologies — will be the ones who are most likely to benefit.”

Yet many Minnesotans venturing out of the state for shots have chronic health problems and feel they deserve the vaccine as much, or even more, than others in neighboring states. Some blame Gov. Tim Walz and his administration for initially prioritizing doses primarily based on age and occupation, rather than health status, and not moving sooner to include people with serious health conditions like cancer and lung disease. The state recently unveiled plans to expand eligibility to more high-risk groups next month, once 70% of seniors are vaccinated.

Lisa Zubar, a 57-year-old retired nurse from Chaska, was not willing to wait any longer after seeing the toll of the virus firsthand. Three of her close relatives have died from the respiratory illness since June. Zubar also has multiple sclerosis and several medical conditions that put her at elevated risk of dying if she ever became infected. So when she learned that she qualified for the vaccine in Missouri, where her daughter attends college, she wasted little time deliberating.

On a sunny day in late February, Zubar and her husband made the 18-hour round trip to Columbia, Mo., for the shots. They plan to return later this month for the second dose.

“Are we the United States or just a bunch of individual states?” Zubar asked. “The goal of the federal vaccine program should be to help all Americans.”

Jerry Anderson said he suspects he would die if he ever contracted the coronavirus. The 63-year-old machinist from Annandale has diabetes and stage 4 lung cancer — two conditions that were not included in the initial phase of the state’s vaccine rollout plan. What’s more, he is taking special medications to battle the cancer that have serious side effects and have weakened his immune system.

For two weeks, Anderson resorted to hunting for leftover vaccines at his local pharmacy after being told they sometimes had excess doses from appointment no-shows. He would call or drop by the pharmacy each afternoon just before closing, but was told each time they had none left and to try back again the next day.

After describing his ordeal on Facebook, a member of the fast-growing Minneapolis Vaccine Hunters Facebook group sent him information about doses suddenly becoming available in North Dakota. Unlike Minnesota, North Dakota has allowed people to be vaccinated who are younger than 65 and have at least two high-risk medical conditions. Having grown up on a farm in western North Dakota, Anderson had no moral qualms about traveling there for the shots.

“When they stuck that needle in my arm, it felt like a thousands pounds had been lifted off my back,” Anderson said. “I was walking on a cloud when I came out of that pharmacy.”

Daniel Randolph, who has prostate cancer, felt a similar sense of relief while returning from North Dakota this week after getting his first dose. He was standing in line at a convenience store in Fergus Falls, Minn., when suddenly he became overwhelmed with emotion. The cashier politely asked him if he was all right after noticing he was staring ahead, as if in shock.

“The realization that I probably would not die from this [virus] just washed over me at that moment, and this huge burden was lifted,” said Randolph, 58, who lives in Richfield and runs an internet marketing company.

Pam Herbstritt, of Chaska, said she struggled for more than a month to find a vaccine appointment for her 17-year-old daughter, Amber, who has epilepsy and a severe form of cerebral palsy known as spastic quadriplegia. Nine months before the pandemic hit, Amber nearly died from a series of involuntary muscle contractions. She spent a week on a vent in a hospital intensive care unit before she stabilized enough to go home.

Amber’s respiratory and immune systems were so weakened by the ordeal that Herbstritt has been afraid to take her outside the home, even for medical appointments. Yet to Herbstritt’s alarm, her daughter still did not qualify for the vaccine in Minnesota. Undeterred, she began scouring the internet for states that offer vaccines to children with high-risk health conditions.

When Herbstritt discovered that her daughter would qualify for the vaccine in North Dakota, she scrambled online and secured an appointment in Wahpeton. She posted a video of the moment her daughter received her first shot on Facebook.

“One, two, three, boink!” said the nurse as she inserted a needle into Amber’s right arm. “Done. Over!”

Her mother erupted in cheers and tears of relief.

“Everyone keeps saying, ‘Be patient, be patient,’ but we have been patient,” Herbstritt said. “We have been isolating at home and doing everything we have been asked to do, but there comes a point when you’re not being heard and you have to act.”