Twitter vs Trump: has Big Tech gone too far? 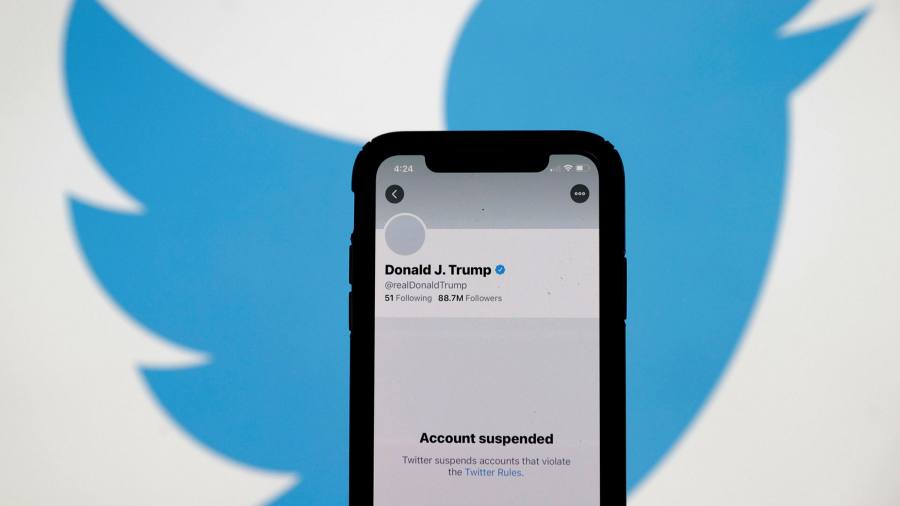 The threat to Donald Trump’s chances of returning to the White House in 2024 may not lie just in Washington, where impeachment proceedings are due to begin this week, but in Silicon Valley, where technology companies have launched an unprecedented crackdown on the president’s promotion machine.

Mr Trump no longer has a Twitter or a Facebook account after both companies barred him from their platforms following the violence wreaked by his supporters at the US Capitol last week. Meanwhile, Apple, Google and Amazon have all taken steps to clamp down on Parler, the niche Twitter rival used by many of Mr Trump’s most fervent rightwing supporters.

The moves have added fuel to a fierce debate about where the balance lies between a tech company’s right to censor users who breach their content policies versus an individual’s right to freedom of expression.

Mr Trump’s critics have applauded his ‘deplatforming’, which many say were long overdue. But others worry that the moves demonstrate how much political power has been built up by a handful of private companies.

“But it should concern everyone when companies like Facebook and Twitter wield the unchecked power to remove people from platforms that have become indispensable for the speech of billions — especially when political realities make those decisions easier.”

For years, social media companies have been under pressure to take action against Mr Trump. Many on the left believe he has used the platforms to fan the flames of violence, amplify conspiracy theories and sow disinformation — including, most recently, baseless claims that Democrats illegally “stole” the election victory from him.

But it took this week’s storming of Capitol Hill by a pro-Trump mob — and the president’s online praise of the rioters — to persuade them to block him altogether.

First, Facebook said it would suspend the president’s account indefinitely. Then Twitter, Mr Trump’s favoured megaphone for speaking directly to his 88m followers, said it would ban him permanently and not allow him to tweet from associated accounts such as that of the White House. YouTube, TikTok, Pinterest and Snap have also introduced restrictions.

And for the first time, tech groups responsible for some of the underlying plumbing of the internet moved to muzzle the pro-Trump apps and forums used to organise Wednesday’s violence. Amazon said it would suspend its web hosting services to Parler, effectively forcing it offline unless it can find a replacement provider. Earlier, Apple and Google also kicked Parler off their app stores.

“Just like every social platform, these services also have their Terms of Service, all of which are supposed to specifically prevent things like calls to violence and hate,” said Matt Rivitz of liberal social media activist group Sleeping Giants. “Until now, they had rarely enforced these rules.”

A former senior Twitter executive said the company believed it had been “incredibly patient” with Mr Trump. But it felt compelled to curb the president this week amid fears of renewed violence around the inauguration of Joe Biden on January 20.

“The warnings in the announcement are clear . . . There is a feeling that more trouble is coming. And if they did nothing they would be criticised for standing by.”

Mr Trump and his closest allies reacted with anger, with the White House saying Twitter employees had “co-ordinated with the Democrats and the Radical Left” to silence him.

For others however, the clampdown was long overdue. Robert Reich, a professor of public policy at Berkeley and a former US labour secretary under Bill Clinton, said: “Social media platforms are four years late. They let Trump’s lies, conspiracy theories, and hatefulness take deep root. The legacy will be with us for years.”

Nevertheless, some believe the technology companies are simply acting in their own self-interest, seeking to stave off criticism from the Democrats and possible regulatory action from an incoming Biden administration.

Mr Biden has previously called for the repeal of Section 230, the part of US law that protects social media companies from being sued for content posted on their platforms. His administration will also now take on antitrust cases against Google and Facebook, while members of Congress continue to push for much stricter federal privacy laws.

Marco Rubio, the Republican senator, told Fox News on Sunday: “It’s very cynical . . . The reason why these guys are doing it is because Democrats are about to take power and they view this as a way to get on their good side to avoid any restrictions or any sort of laws being passed that hurt them.”

Either way, last week’s events heap pressure on the Biden administration to act sooner rather than later to tighten supervision of Big Tech businesses.

Meanwhile, Mr Trump is clearly left with narrower options for communicating with his supporters and the world. He has touted the possibility of setting up his own platform, but that too could face a clampdown from web hosting service providers, for example.

Much hangs on whether Facebook decides to make its ban of the president permanent. “If they don’t ban and he comes back, then Facebook becomes his new Twitter and it’ll become his primary vehicle for posting,” said Angelo Carusone, chief executive of non-profit Media Matters.

But he added: “His political power will be affected because it limits his ability to serve as the centralised voice of the opposition. Without a doubt it takes a huge amount of wind out of his sails.”

Video: What the US Capitol riot means for both Republicans and Democrats